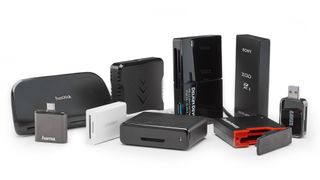 Now that many modern laptops lack an SD card reader in the ongoing quest for ultimate portability, suddenly memory card readers are back in fashion.

There’s no shortage of USB card readers out there, from budget-friendly and highly-portable models so tiny you could mistake them for a USB flash drive, through to larger models that will live on a desktop right by your computer, with transfer speeds to max out the performance of the best memory cards.

We’ve assembled a selection of quality card readers for you to find the one that suits you. Many of our options also cater for other card formats CompactFlash, CFexpress, XQD and CFast, so there should be something for everyone.

So what's the best memory card reader? Right now, we think it's ProGrade Digital's USB 3.1 Gen 2 Dual-Slot Card Reader: it's not cheap, but it's the fastest card reader you can buy for SD and CFast 2.0 cards.

Here are the best memory card readers you can buy right now...

It’s not cheap, but this is the best SD reader you can buy

ProGrade Digital is a relatively new brand with a focus on high quality kit. To that end this is one of a rare breed of card readers to be USB 3.1 Gen 2 compliant, which means it can transfer at theoretically double the speed of a USB 3.0 / 3.1 Gen 1 reader.

In practice even the fastest UHS-II SD card won’t get anywhere near USB 3.1 Gen 2’s 1250GB/s theoretical bandwidth limit, but the benefit is this reader can unleash every last drop of performance from any SD or CFast 2.0 card.

We clocked this card reader at a maximum video read/write rate of 264MB/s and 232MB/s respectively, fully exploiting the claimed 260MB/s read and 240MB/s write figures of our UHS-II SD card. Image transfer rates of 202MB/s read and 103MB/s in our testedwrite were just as impressive.

Our UHS-I test card was equally well catered for, with its claimed 95MB/s / 90MB/s read/write speeds fully realised at 99MB/s and 88MB/s.

A great all-rounder best suited to desktop use

It may be a fairly cheap card reader, but the ImageMate Pro feels like a quality product, as it’s well built and weighty enough to sit securely on a desk. And this is where it belongs, as at 122 x 58 x 17mm, it’s big by card reader standards.

A trio of card slots are spread neatly across the front, with CF, UHS-II SD, and MicroSD to choose from. A detachable USB Type-A cable is provided, so you will need an adapter if you intend to plug in to a USB-C port.

When it comes to UHS-I SD cards, maximum sustained transfer speeds of 96MB/s read and 83MB/s write aren't quite class-leading, but not to the extent that you’d really notice in real-world use.

Our budget choice – a pocket rocket and great laptop companion

Hama’s entry doesn’t look like much, measuring a tiny 34 x 40 x 9.7mm. It’s partly intended to add an SD port directly to a tablet or smartphone, hence the built-in USB Type-C plug - no cable required. It’s also just the ticket for complimenting the newest generation of ultra-slim laptops that only sport Type-C ports.

Despite the compactness and reasonable price, this is still a UHS-II SD reader, so can max out the very quickest SD cards. We found it impressively fast, peaking at 260MB/s when reading video and 195MB/s reading images. Write speeds with video are slightly less remarkable, as the 199MB/s figure we achieved is nothing special, though the Hama bounces back with a winning 118MB/s performance when writing images.

Performance with UHS-I SD cards is just as stellar, with a great 99MB/s maximum read rate and 85MB/s write speed.

Great value and versatility, if slightly lacking in the speed stakes

With the latest laptops like the MacBook Pro ditching every port other than Thunderbolt/USB Type-C, it isn’t just your memory card that you may be struggling to connect.

Kingston’s Nucleum is a premium, metal-encased hub containing SD and MicroSD ports, plus two conventional USB Type-A ports, a full-size HDMI socket, and two USB Type-C ports, one of which is used as a power socket to connect your MacBook’s charger. There’s a short hard-wired cable terminating in a USB Type-C plug, and all this from a device no larger than some standard card readers.

Sandisk's Extreme Pro CFexpress card reader set a new benchmark for memory card performance in our test lab, hitting a sustained 718MB/s read speed when transferring one large 4K video file. Image read/write rates of 534/410MB/s are just as incredible, easily eclipsing even the fastest UHS-II SD cards. The only slight disappointment is that CFexpress cards are capable of even higher transfer speeds - up to 1700MB/s. The bottleneck here is likely the reader's USB 3.1 Gen 2 connection, which though very fast, can't keep up with the blistering performance available from CFexpress cards. But if you can live with that, this Sandisk CFexpress reader is a superb - if quite pricey - choice.

Despite being cheap as chips (well, quite a few portions of chips, but still) this little reader is a pleasingly capable device, able to achieve speedy data transfer rates thanks to its USB 3.0 connection. It doesn't cover all the card types, most notably missing out on XQD, CompactFlash and UHS-II SD (though it does UHS-I), however this isn't a problem for you, the Anker USB 3.0 Card Reader will get the job done quickly and efficiently.

It's also so tiny that you can take it anywhere, measuring 5.3 x 2.7 x 1.1cm and weighing a tiny 16g, and there's also an 18-month warranty to give you peace of mind. Need something simple and straightforward? This little reader is a solid buy.

A fairly good reader, but only worth buying if you need XQD

XQD card readers aren’t all that common, or in this case, cheap. Frustrating, as Sony’s lightweight build doesn't make the MRW-E90 feel like a quality product.

We tested the MRW-E90 with a Sony 64GB XQD card boasting claimed max read/write speeds of 440/400MB/s. However we could only manage 311/173MB/s in a best-case scenario of transferring one large 4K video file. This is likely due to the reader’s fairly slow USB 3.1 Gen 1 interface, which though theoretically capable of up to 625MB/s, is much slower in practice.

UHS-I SD performance is also decent, with the Sony managing reasonable 93/83MB/s read/write speeds in our testing, coming close to the claimed 95/90MB/s max speed of our SD test card.

Not a bad reader, but it’s outclassed by many rivals

This card reader sports the classic combo of SD and CompactFlash slots, both being the fastest of their type - UHS-II, and UDMA 7. You can use both simultaneously, and the case’s design means a card of each type can be stored inside the reader, protected by a hinged rubber door that closes around them.

The 90cm USB Type-A lead is hardwired to the reader, so while you won’t lose it, it can be slightly awkward for transportation, and you’ll need an adapter to connect this reader to a laptop like the current MacBook Pro.

Speed wise, we could only extract a max video read speed of 223MB/s and 198MB/s write rate from our UHS-II SD card - not awful, but some way shot of some other readers we've tested. Image transfer performance is worse still, with 152MB/s read and 98MB/s write speeds being slower than average. Even with a UHS-I SD card the Delkin reader struggled, as 87MB/s read and 82MB/s write speeds are down - albeit not by much - on what rival readers were capable of extracting from our test card with its 95/90MB/s max read/write rates.

XQD card readers are a relative rarity, and therefore not cheap. Until now. Dynamode's XQD reader can be had for less than half the cost of Sony's MRW-E90 XQD reader, yet you still get an SD slot, and even a USB Type-A port, which can be very useful if your laptop only has USB-C ports.

The reader itself connects to your computer via a short 11cm-long hardwired cable terminated by a USB Type-C plug. At 60 x 45 x 14mm, this card reader is pretty compact, and it's also very light.

Testing with a Sony XQD card rated at 440/400MB/s read/write, the Dynamode achieved video read/write speeds of 323/175MB/s when transferring a single 4K video file - marginally faster than the 311/173MB/s achieved by a Sony MRW-E90 reader. Multiple image read/write performance of 293/160MB/s is also none too shabby.

However, this isn't the card reader to buy if you'll regularly use it with SD cards. The SD slot is UHS-I only, which is stingy when most equivalently-priced SD card readers are now UHS-II. Unsurprisingly performance suffers, peaking at 91MB/s for video read speed, and dropping to 77MB/s when writing a folder of images.

Remember, while cameras with UHS-II SD slots are still quite rare, you can still use a UHS-II SD card in a UHS-I camera and benefit from the extra card speed when transferring your shots to your computer. But not with this Dynamode reader.

5 things to look for in a card reader

Many card readers now connect to your computer using a USB-C plug, but adapters are readily available to convert to normal USB.

USB 3.1 Gen 2 is twice as fast than Gen 1, but few readers use it, and even fewer memory cards are fast enough to exploit Gen 2.

Some readers use a USB cable that’s hard-wired to the reader body, which can be problematic if the cable ever gets damaged.

With fewer and fewer ports on the sides of modern laptops, a card reader hub with extra USB sockets may be just the ticket.