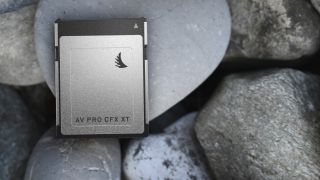 Last week CFexpress was born. Sandisk put the first of this new generation of high-octane memory cards on sale - whilst almost simultaneously Canon launched the first camera that can use CFexpress cards. Now, at IBC 2019, Angelbird has become the second memory specialist to release CFexpress cards.

Angelbird promises us two ranges of CFexpress cards from the get-go. The AV PRO CFX memory card is designed for professional cinema cameras demanding high-speeds and extreme durability in the CFexpress Type-B form factor that will be used in the first cameras.

The more expensive AV PRO CFX XT cards are designed to offer a premium option for those concerned with sustained speed performance for higher resolution demands. Confusingly, these cards also offer maximum read/write speeds of up to 1700 MB/s / 1400 MB/s.

However, during constant recording, the write speed on the entry-level AV PRO CFX cards "will settle in at a guaranteed minimum sustained speed of 550 MB/s up to 1 TB capacity. Which the company points out is 150 MB/s higher speed than the maximum write speed of XQD.

Also announced is Angelbird's own CFexpress card reader. The reader will come with a 0.5m Type-C to Type-C cable, an active USB-A to USB-C adapter, non-slip rubber pads for added stability during operation, and Velcro binding for easy portability.

The recessed (USB 3.1 Gen 2, 10 Gb/s connection port helps to provide a secure connection point and minimize wear and tear. Angelbird has a “Write Protect” switch on its card readers, which enables the user to feel secure that they will not delete or erase anything by mistake.

The pricing for the cards, and availability, will be announced in December when the first CFexpress cameras will be on sale.