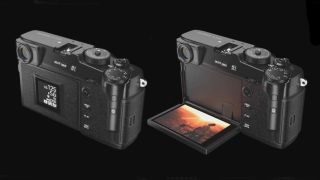 The Fujifilm X-Pro3 has just been officially announced at the Fujifilm X Summit in Shibuya, Japan – and it could spell the death of chimping, thanks to its "hidden LCD" rear screen.

While they certainly raised more than a few eyebrows at the time, the earlier rumors were proven true as the camera has materialized with no D-pad, and does away with a conventional rear screen.

Instead, to solve a "problem" that Fujifilm identified of photographers spending too much time looking at the back screen to check their composition, the X-Pro3 features what the company is calling a "hidden LCD".

This dual-sided display has a smaller LCD panel, effectively duplicating the top LCD panel from conventional cameras that details exposure information. In order to actually see your images, or use live view, you have to flip the display down to reveal a standard LCD screen hidden on the inside.

It's a very convoluted way of encouraging photographers to spend more time looking through the viewfinder taking pictures, and less time looking at the back screen contemplating them. Though of course, the fact of the matter is that any camera with an articulating LCD screen can do this already, simply by turning the screen backwards and folding it away.

That said, the rear LCD panel showing your exposure settings is definitely cool – especially since, if you use one of the film simulations, it will display an image that mimics the look of an old-fashioned film canister inside your camera.

Which is a perfect way to showcase Fujifilm's latest simulation, Classic Negative – another throwback, and welcomingly three-dimensional vintage simulation.

Despite being made of titanium – the company's first such camera in 20 years, dating back to the Fujifilm TX-1 rangefinder – the X-Pro3 weighs less than 900g. And it comes in three colors that are more than just style options.

Black is the regular titanium options, but Dura Black and Dura Silver actually feature special coatings that are even more durable; allegedly ten times tougher than stainless steel against scratches, almost approaching the level of durability as sapphire. Hopefully we can expect Joanna Lumley to come on board as a Fujifilm ambassador for the ultimate Sapphire and Steel tie-in.

No other details about specs, pricing or release were released, but the official Fujifilm X-Pro3 announcement is on 23 October, so all will be revealed then.

The best Fujifilm cameras in 2019

Best film: our picks of the best 35mm film, roll film, and sheet film for your camera