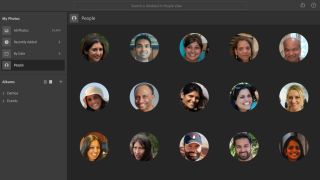 Alongside the improvements to Photoshop CC announced at the Adobe Max 2018 conference, both versions of Adobe Lightroom get important feature updates, with improved artificial intelligence Sensei searches and sharing options in Lightroom CC and combined HDR and panorama merging in Lightroom Classic CC and Adobe Camera Raw.

The two versions of Lightroom seem destined to continue somewhat separate development paths, at least for the time being.

Adobe’s decision to offer a ‘web-first’ version of Lightroom with cloud-based image storage has opened the path to ‘intelligent’ searches via its cloud-based Sensei AI technologies.

So Lightroom CC gets a new People View to help you quickly find “the people you care about”. Lightroom CC can now automatically tag people in photographs so that you can find all the images where they appear. This feature will be available on the Mac, Windows, iOS, Android and ChromeOS versions.

In fact Adobe has improved the Lightroom CC search tools generally by adding automatic search suggestions as you type, based on image metadata like the camera used, lens, aperture, ISO, location or keywords.

Sharing options have been improved too via a Share Tab which offers an easy way to browse and share albums and images made using Adobe’s lightroom.adobe.com website. You’ll also be able to share albums directly with portfolios you’ve set up on the separate but parallel Adobe Portfolio service, using a new ‘Connectors’ technology which Adobe intends to roll out to third party companies too, so that you may one day be able to order prints or photo books.

In the iOS and Android versions of Lightroom CC, you’ll be able to choose which images to share based on flags or star ratings.

Interestingly, Adobe has added an Apple Photos Migrator option for moving your photo library from Apple’s own cloud/desktop-based service to Adobe’s. Along with the new people-finder options, this seems like a deliberate attempt to win over new or novice users to the Lightroom CC ecosystem.

Adobe is keen not to lose its existing ‘desktop-first’ customers, so it has also brought in several improvements for Lightroom Classic CC– the ‘old’ desktop-based Lightroom.

The company has focused on performance updates and image editing enhancements in line with its Adobe Max 2018 message – create better images, faster.

HDR and Panorama fans now get to combine the two with a new HDR Panorama Merge option, so that you can now capture bracketed, overlapping frames and get full dynamic range at the same time as capturing stitched wide-angle views. Previously, this would have been a time-consuming two-stage process. This feature will also be available in Adobe Camera Raw.

Adobe has also introduced improved Lightroom Classic CC tethered shooting for Canon cameras, bringing a big increase in speed and stability and image transfer times between 1.5x and 2x faster. It says it’s working on similar improvements for Nikon cameras, which will come in a future release.

Also new in Lightroom Classic CC and Adobe Camera Raw is a Depth Range masking tool to be used alongside local adjustments. This won’t work on any old image, though – it requires depth information about object locations in three-dimensional space captured as an additional image channel by the latest smartphone cameras – one example is the iPhone’s Portrait mode.

As with Adobe’s Photoshop CC updates, these are improvements to Lightroom and Adobe Camera Raw rather than revolutionary changes. Lightroom CC does not yet have full feature parity with Lightroom Classic CC, and there are search features in Lightroom CC that the Classic version does not have.

The best photo-editing laptops in 2018

The best monitors for photographers