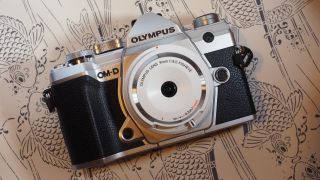 Is there any such thing as the best cheap lens? Surely lenses should be optically brilliant, which costs money? Well, not necessarily – on both counts. First, for many photographers, lenses are about getting the right 'look', regardless of technical quality. Second, there are quite a few cheap lenses that are actually rather good, mostly because they're basic but effective designs that don't cost a lot to make.

Most of us have already got standard and telephoto zooms that cover pretty much any eventuality, so any new lens has either got to offer up whole new shooting opportunities, be incredibly CHEAP or, in the best of all worlds, achieve both!

What if you could get an extra lens that's cheap, compact, light and easy to pop into a spare corner of your camera bag? And what if that lens enabled a different style of shooting to your regular zoom lenses and could give your photography a new twist?

That's just what the best Lomo and Lensbaby lenses do, but they can be pretty expensive, and we've got a whole separate guide for those. Instead, here's a choice selection of prime lenses that add value to your camera outfit – and definitely with the emphasis on value!

This tiny DSLR lens comes with a tiny price, but it's actually rather good

This is a ‘pancake’ lenses that's about an inch thick and a real lightweight at just 125g. It’s brilliant for street photography with a Canon APS-C format SLR, where it gives an effective focal length of just over 38mm in full-frame terms – so it's a handy all-round standard lens, in face. The f/2.8 aperture rating is also useful, and rather faster than in a kit zoom lens. It's inexpensive for an own-brand Canon lens but still features an aspherical element, Super Spectra coatings and a fairly well-rounded seven-blade diaphragm. Autofocus is taken care of by a stepping motor, with an electronically coupled manual focus ring. The small build means the STM autofocus is gear-type rather than linear, so it’s audible and not particularly quick in operation, but gets the job done. Image quality is very good indeed, making you wonder why some prime lenses need to be quite so big.

Small and light
Great image quality
Very versatile
Nothing, at this price!

The so-called ‘nifty fifty’ is one of the most popular types of prime lens on the market, and with good reason. You can get a much tighter depth of field than with a kit zoom lens, for blurring the background and focusing all of the attention on the main subject. You can use it as a 50mm lens on full frame Canons, while on APS-C Canon's you get an 80mm effective focal length – perfect for portraiture. This lens uses a gear-type autofocus stepping motor which is audible but much quieter than the more basic electric motor of previous Canon 50mm f/1.8. Handling is also improved, as the manual focus ring no longer rotates during autofocus. Apart from in the extreme corners, sharpness remains impressive even at the widest aperture, and barrel distortion is negligible. There’s some noticeable axial (or longitudinal) colour fringing when shooting wide-open at f/1.8 but overall image quality is very good.

This Nikon lens is ideal any time you need a wider aperture than is available from your kit zoom lens, either for letting in more light to increase shutter speeds, or to get a tighter depth of field. It’s equally useful for portraiture on DX format Nikons, where the 1.5x crop factor gives a longer effective focal length of 75mm. You get seven diaphragm blades, ring-type ultrasonic autofocus with full-time manual override, and an optical path that features one aspherical element. There's also a weather-seal ring on the mounting plate, and a focus distance scale. The sharpness and contrast are impressive even when shooting wide-open at f/1.8. Bokeh is nice and smooth as well although, typical of seven-blade diaphragms, defocused lights take on a heptagonal shape when stopping down a little.

Unlike Canon, Nikon makes a ‘standard’ prime for its DX (or APS-C) format SLRs, in the shape of this 35mm lens, which gives an effective focal length of 52.5mm. You a hood and carrying pouch (unlike Canon). Inside the lens barrel are eight optical elements, including one aspherical element. Build quality is pretty good for such an inexpensive lens, with a metal rather than plastic mounting plate, ring-type ultrasonic autofocus system and a fairly well-rounded seven-blade diaphragm. However, there’s no focus distance scale nor the weather-seal ring that’s often featured on the mounting plates of Nikon lenses. Autofocus is reasonably quick and whisper-quiet and image quality is mostly good, although corner-sharpness is a little disappointing throughout the entire aperture range. Even so, this lens is compact and lightweight, and well worth the asking price.

Flatter than a pancake, and great fun to use

Incredibly small and light
Fun to use... and cheap!
Gives a funky fisheye perspective
Image quality isn't the best
No aperture adjustment
No autofocus

Inch-thick ‘pancake’ lenses have become quite common, but this Olympus lens is even thinner, at about half an inch thick, literally about the size of a body cap. Olympus also makes a similarly priced 15mm lens, but it's not that great and  doesn’t really give you anything that’s not covered by a standard zoom. The 9mm fisheye gives a completely different shooting experience, producing the trademark extreme barrel distortion, while still utilizing the entire image sensor. This lens has no adjustable diaphragm, just a fixed aperture of f/8. There’s also no autofocus but the depth of field is so enormous that the two-position focus lever is all you need. The viewing angle of 140-degrees is not as wide as the 180-degrees of most diagonal fisheye lenses, and the fisheye effect itself looks less extreme. Sharpness is pretty reasonable but drops off quite a bit towards the corners, where colour fringing can be very noticeable – but its performance/price ratio is brilliant.

The 26mm Toy is designed to blur off-centre areas of the frame, giving a ‘toy camera’ effect. Unlike SLR Magic's 35mm f/1.7 lens, it’s only available for Micro Four Thirds cameras, so there’s no Sony E-mount option. This is a strictly manual lens, with a manually controlled aperture marked between f/1.4 and f/8. A conventional focus distance scale is replaced by basic near/far directional arrows. To add a bit of flourish to the control rings, the lens comes with a range of black, white and brightly coloured rubber grip rings. The blurring effect away from the central region of the frame lives up to its billing, and can produce an almost swirly look. Another trick for focusing attention on the central attraction is that the lens produces fairly heavy vignetting. All in all, it’s a fun lens to use, as any ‘toy’ should be. Just remember this lens is all about the 'look' not serious optical quality.

A great value prime for Pentax DSLRs, though with noisy autofocus

This lens may have a typical 50mm standard prime focal length, but it's designed exclusively for use with APS-C format SLRs, rather than being full-frame compatible, so really it's a short telephoto prime with an effective focal length of 75mm. That’s often ideal for still life, portraiture and any time you want a bit more reach than a standard focal length will deliver. This is a little smaller than most 50mm lenses and is noticeably lighter, at 122g. That’s mostly due to it having a plastic rather than metal mounting plate, and no autofocus motor. Instead, autofocus is driven by a motor in the camera body via a helical thread. The autofocusing is reasonably quick but is very noisy compared to any comparable lens with an in-built AF motor. There’s also no focus distance scale. Sharpness is mostly very respectable, but underwhelming when shooting wide-open at f/1.8. The seven-blade diaphragm is fairly well-rounded, helping to maintain decent bokeh when stopping down a little.

Great for blurring the surroundings around your subject

Available in Sony E and Micro Four Thirds mount options, this low-cost lens is made by SLR Magic and distributed in the UK by Holdan. It’s remarkably small and lightweight for a 35mm f/1.7 lens, at just 44x39mm and 90g, and is a fully manual optic. This means there’s no electronic communication with the host camera, and focusing and aperture control are applied by control rings on the lens itself. The focus ring has distance markings on it, while the stepless aperture ring has markings at f/1.7, then in full f/stops from f/2 to f/5.6, then nothing until f/16. Go beyond this and the diaphragm closes completely. Build quality feels pretty good for such a small and inexpensive lens and the control rings have a smooth action. Sharpness is pretty good in the central region of the frame, even when shooting wide-open at f/1.7. However, towards the edges and corners, the lens aims to give a deliberately soft and blurry look, bumping up the bokeh. It achieves this very well.