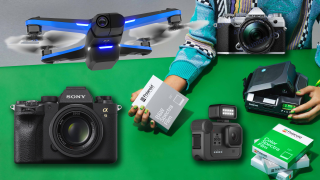 Cameras of every shape and size, both old and new, dominated this week's camera news. In fact, we literally had something old, something(s) new, something borrowed and something blue!

The 'old' came in the form of a discontinued Polaroid camera and film. The 'new' was three new cameras from Sony and GoPro. The 'borrowed' was a set of leaked specs on the upcoming Olympus camera, and the 'blue' was a remarkable new drone.

Check out the five biggest camera news stories as they developed (or, in the case of Polaroid, didn't develop) over the past week…

After months of leaks, GoPro has officially announced its latest action camera: the GoPro Hero8 Black, which is 14% lighter, has a camera with a "2x stronger lens", features a built-in foldaway mount, a slew of expansion Mods, and now features image stabilization all the way down to 240 frames per second.

The basic capture capabilities of the GoPro Hero8 Black remain largely the same; its 12MP camera can record 4K video up to 60 fps and 1080p video at up to 240fps, though it has received numerous upgrades on the software side to improve its performance in use.

Also announced was the GoPro Max, which was assumed to be just a regular 360 camera like its predecessor, the GoPro Fusion 360. However, Max isn't just a 360 camera; with the option to shoot 360 footage with the dual lenses, or to shoot in the single-lens Hero mode, GoPro have given consumers "three cameras in one"…

Sony A9 II announced – but what's to shout about?

Rumors have been circulating that a new Sony A9 Mark II was on the way, with all sorts of speculation about what it might be able to do, and it's suddenly arrived with precious little fanfare.

To the casual observer, it might look as if nothing much has changed, but to pro photographers Sony's updates could prove just the incentive they need to upgrade their current body or even switch systems.

One of the improvements in the Sony Alpha A9 Mark II is in the design of the body, and in particular its durability. We weren't aware of any durability issues in the original, but Sony has nevertheless beefed up the camera's weather sealing to cope with the harsh conditions it's likely to be used in…

Read more: Sony Alpha A9 II breaks cover but the upgrades are evolutionary

The latest specifications have leaked for one of the most long-awaited new cameras, the Olympus OM-D E-M5 Mark III – and it earlier claims that it possesses "E-M1X features for a fraction of the price" seem to hold true.

The Olympus OM-D E-M5 Mark III will feature handheld Hi Res Shot – a 50MP shooting mode that we were told was only possible on the professional Olympus E-M1X thanks to its dual, last-generation, TruePic VIII processors.

The E-M5 III will reportedly use the same TruePic VIII rather than a new processor as was previously reported. The camera will also feature improved in-body image stabilization, now going up to 5.5 stops, and will come in over 100g lighter than its predecessor at just 366g…

Polaroid Originals announced that it has ceased production of wide format Spectra film – and, at the same time, it has also ended its program of restoring old Polaroid Spectra cameras. This marks the end of an era for analog photography, closing the 33-year chapter of the Spectra camera and instant film that launched in 1986.

"With three decades behind them, these wide format cameras are now coming to the end of their useful lives," wrote Oskar Smolokowski, CEO of Polaroid Originals. "Jamming and frequent breakdowns are now affecting the majority of these cameras, and unfortunately, this is not something we can influence with our film.

"After extensive testing, we have concluded that we cannot support these cameras any longer. So today, with a heavy heart, we are announcing the end of production for Spectra film"…

For some months, the drone maestros at Skydio have, as they put it, been selling their equivalent of the Tesla Roadster, the expensive proof-of-concept. Skydio's breakthrough with its first drone, the R1, was autonomy – the ability  to follow its owner through forests and down mountains – but at $2,500 and with what a narrow feature set, it wasn’t for everyone. The Skydio 2 is set to change things.

The new drone has a far more palatable price point, $999, still features the unparalleled AI-driven smart cinematography system, but adds the features that the wider drone market has come to expect. In other words the Skydio 2 can be the angel over your shoulder, capturing amazing action moments as you concentrate on your sport, your flying camera for landscapes and events, and even a DroneDeploy-compatible surveying tool…

Read more: Skydio 2 drone sets off to rewrite the rules for aerial photography

The best Canon camera in 2019: from DSLR to mirrorless to PowerShot and Ixus
The best telescopes for astrophotography in 2019
The best video editing software for vloggers and filmmakers