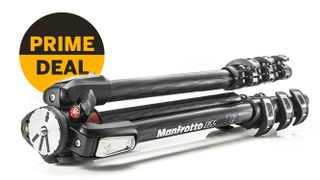 A tripod is not the most exciting bit of tech that you could buy on Prime Day – but for the photography a solid set of legs to support your cameras could be one of the wisest investments to buy. Amazon has managed to get some cracking prices on some classic, well-respected Manfrotto tripods (and tripod heads) to help you in your quest for sharper shots and wobble-free video.

There is a range of great Prime deals in the tripod department, but our pick has to be this 055 Series carbon fibre tripod. It is a four section version with a maximum shooting height of 170cm, and a folding length of 54cm – so there's no excuse not to pack it on your travels.

Manfrotto 055 Carbon Fibre 4-Section tripod
Save £79 now £220
The 055 series is one of the most popular tripods amongst serious photographers the world over - and the perfect addition to your kit to give you stable shots day and night. This model has a four-section construction, to make it easier to transport - and is made of carbon fiber for better stability and a lighter weight.
UK deal – ends at midnight on 16 JulyView Deal

Manfrotto 055 Carbon Fibre 3-Section tripod
Save £39 now £210
Not quite as much off this version, compared with the three-section version, but at £210 this is actually slightly cheaper and is still a great deal if you are looking of a tripod that you can depend upon for super-sharp images, however long the exposure
UK deal – ends at midnight on 16 JulyView Deal

Manfrotto 055 Aluminum 3-Section tripod & 3-Way Head
Save £64, now £165
This low-cost aluminium model is a brilliant tripod for beginners and enthusiasts – and has the advantage that it is already kitted up with the  award-winning X-Pro 3-Way head
UK deal – ends at midnight on 16 JulyView Deal

Manfrotto X-Pro 3-way tripod head
Save 25% now £52.48
This is a great discount on Manfrotto’s X-Pro three-way head (MHXPRO-3W) with retractable levers for compactness and easy carrying, and friction control for more precise framing and shooting. The X-PRO 3-Way head is a particularly good choice for photographers using heavy lenses - and a perfect partner for the 055 and 190 Manfrotto tripods currently in the Prime Day sale.
UK deal – ends at midnight on 16 JulyView Deal

Manfrotto MVH502AH fluid video head £96.25
This is one of our favorite video tripod heads. The fluid head mechanism is designed to give you smooth pan and tilt movements, so that you can follow subjects as you actually record your footage on a DSLR, mirrorless camera set-up, or camcorder. Takes a payload of up to 7kg.
UK deal – ends midnight 16 JulyView Deal

The best ball heads for your tripod