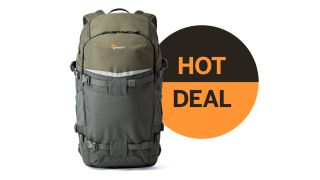 Black Friday might have technically finished, but the deals just keep rolling in. Now, the Black Friday camera deals also include some interesting deals from Amazon UK, who have discounted a wide range of Lowepro bags and backpacks just for today. With up to £84 off these camera backpacks, you no longer need to worry about how you're going to pack for your next photographic adventure.

One of our favorite deals from Lowepro is the LP37016-PWW Flipside Trek BP 450 AW, which has been discounted from its original price of £179.99 to just £95.99! This  saving is just a few pennies shy of £84, and definitely makes this one of the best Amazon Black Friday camera deals we've seen so far.

However, this backpack isn't the only Lowepro product to receive a juicy discount. There are four other amazing Lowepro bag deals that you can choose from as well. However, just be aware that all of these deals will run out at midnight on 30 November, so don't delay!