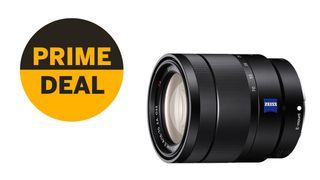 If you've always dreamed of owning a Carl Zeiss-designed lens, there's no better time to pick one up – the Sony E 16-70mm f4 ZA OSS Lens (SEL1670Z) for APS-C cameras is an absolute steal right now. The Amazon Prime Day deal slashes the price by £200, but with an additional £80 off in cashback from Sony it's down to a criminally low £369!

We crowned this the best overall APS-C lens in our list of best Sony lenses, with its constant f/4 aperture and image stabilization. The up-market optical path is based on a Zeiss design and includes legendary T* coatings to reduce ghosting and flare, while enhancing color and contrast.

Using a Linear Motor keeps the lens build as compact as possible – at just 308g it’s refreshingly lightweight for such a powerful standard zoom. A great dance partner for the A6500, which is also on a great Prime Day deal here:

Olympus M.ZUIKO 40-150mm f/4-5.6 R zoom - Black | £85.99
This Micro Four Thirds lens will fit a wide range of Olympus and Panasonic cameras (and some from Blackmagic Design too). This telezoom is the perfect accompaniment to the kit lens that came with your camera, and thanks to the crop factor on an MFT camera give you an effective 80-300mm range that is great for wildlife, airshows, and sports. Make sure you pick the black version of this lens, as the silver version is over £50 more expensive!View Deal

Canon EOS RP Body + Mount Adapter EF-EOS R + RF 35mm f/1.8 Macro IS STM Lens: save £388, now £1509
This combo is the star UK deal on the second day of Prime Day. This kit gives you the full-frame mirrorless RP body, plus the EF-RF adaptor that allows you to use DSLR lenses with it. Plus you get the superb 35mm f/1.8 macro prime. A perfect start into the RF system - at a very appealing price.
UK deal – ends midnight 16 July (or whilst stocks last)View Deal

Amazon Kindle Fire HD10 (32GB) - £84.99 (save £65)
A tablet is becoming a must-have accessory for any photographer... for research, to show others your portfolio or for a bit of light image editing when travelling. The Fire HD10 is our favourite budget tablet - but with this huge Prime Day discount it is a steal. Features a 10in Full HD screen and a built-in Alexa smart speaker.
UK deal – ends midnight 16 JulyView Deal