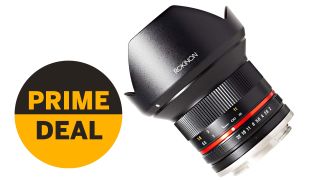 Looking for new lenses and new ways to see the world with your camera? Rokinon lenses (branded Samyang in other territories) are fixed focal length prime lenses for Canon and Nikon DSLRs or mirrorless cameras. They are a compact and affordable alternative to zoom lenses with fast maximum apertures and manual focusing.

They’re already very affordable, but Amazon Prime Day will bring a whole sequence of lighting deals on specific lenses throughout Monday 15 July and Tuesday 16 July, with each deal lasting just a few hours – so if you want to bag a bargain, you need to keep your wits about you!

It's not just about lenses, though – make sure you check out all of the best Amazon Prime Day deals. Not an Amazon Prime member? Sign-up for a free 30-day trial to take advantage of these offers.

We’ve listed some of the best Rokinon lens deals below:

Rokinon 8mm F2.8 UMC Fisheye II: save 48% @ Amazon
A fisheye lens produces a unique ultra-wideangle perspective, and this Rokinon 8mm fisheye for APS-C mirrorless cameras is almost half price, for just a few hours only. It's available not just in Sony E mounts but Canon M and Fujifilm X mount versions too. It offers a 180-degree angle of view and a maximum aperture of f/2.8.
US lightning deal – starts 3:35 ends 9:35 15 JulyView Deal

Rokinon 24mm F/1.4 for Canon: save 54% @ Amazon
Wide aperture prime lenses are usually expensive, but this Rokinon 24mm f/1.4 is already good value at its regular price, and at 54% off on Amazon Prime day, it's an amazing deal. It's for full-frame Canon DSLRs, but note this is a manual focus lens only (not autofocus).
US lightning deal – starts 07:45 ends 13:45 16 JulyView Deal

Rokinon 12mm F2.0 Lens for Canon EF-M: save 61% @ Amazon
If you've got a Canon EOS M mirrorless camera, then get this! The Rokinon 12mm f/2.0 lens is a manual focus ultra-wideangle lens that's perfect for travel shots and cramped interiors. It's a good deal when it's not on a discount, but the 61% reduction on this Amazon Prime Day lighting deal is just out of this world.
US lightning deal – 08:15 to 14:15 on 15 JulyView Deal

Manfrotto 055 Aluminum 3-Section tripod & 3-Way Head
Save 56%
The 055 series is one of the most popular tripods amongst serious photographers the world over - and the perfect addition to your kit to give you stable shots day and night. This model has three-section legs with clip locks and a center column that flips to create a boom arm when needed. This kit comes supplied with award-winning X-Pro 3-Way head
US deal – ends at 15.55 on 15 July

Insta360 EVO: was $419.99, now $335.99 @ Amazon
This amazing action cam offers either 180-degree 3D imaging or regular 2D 360 video and stills, via a unique folding design that lets you clip its cameras back-to back (360) or lock them into a side-by side position (3D). Its square design makes it straightforward to mount as an action cam and gives its unique dual role.
US deal – ends at midnight on 16 JulyView Deal

ViewSonic VX3211-4K-MHD Monitor: save 20% @ Amazon
Is it time to upgrade your computer monitor? This 32-inch ViewSonic VX3211-4K-MHD 32 Inch 4K UHD Monitor will certainly give you the big picture, and with 4K UHD resolution to make your photos and videos crystal clear. It also offers 99% compatibility with the professional Adobe RGB colour space, and connects to both Macs and PCs via HDMI.
US lightning deal – starts 03:00 ends 09:00 16 JulyView Deal

WD 6TB Elements external hard drive: save 53% @ Amazon
Sooner or later you'll need external storage to handle your ever-growing image library and video assets, as your computer's internal storage is limited. This WD 6TB hard drive gives you lots of extra space, and is an incredible deal – for one day only – at less than half price. You can also use it for all those backups you've been putting off!
US spotlight deal – ends at midnight on 16 JulyView Deal

SanDisk 256GB Extreme SDXC: save 40% @ Amazon
High-capacity memory cards are expensive, fast memory cards are expensive too, and if you want both you've got the perfect storm! That makes this 40% discount on the SanDisk 256GB Extreme SDXC card unmissable. This card has the capacity to cope with the longest shooting sessions, and the V30 speed rating to handle 4K video capture.
US spotlight deal – ends at midnight on 16 JulyView Deal

• The best Amazon Prime Day camera deals: everything you need to know