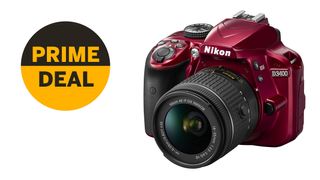 This Lightning Deal might be the best Amazon Prime Day deal we've seen for a camera! Nikon's brilliant entry level camera has been slashed by a massive 51% to just $315 – but stocks are limited and the deal won't last, so strike now before it's too late!

Amazon Kindle Fire HD10 (32GB) - £84.99 (save £65)
A tablet is becoming a must-have accessory for any photographer... for research, to show others your portfolio or for a bit of light image editing when travelling. The Fire HD10 is our favourite budget tablet - but with this huge Prime Day discount it is a steal. Features a 10in Full HD screen and a built-in Alexa smart speaker.
UK deal – ends midnight 16 JulyView Deal

The best Amazon Prime Day camera deals: everything you need to know
The best compact cameras in 2019: from superzooms to point and shoots
The best Nikon cameras in 2019: Nikons for beginners, enthusiasts and pros