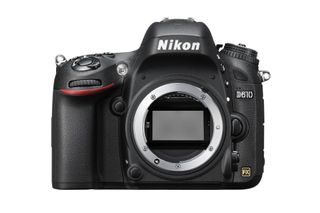 We saw great deals on Black Friday and Green Monday on the Nikon D610... but now in the Boxing Day sales the price has got even better. The price of this full-frame DSLR is now down to an incredible £699! That is a full £50 cheaper than it was on Black Friday.

The Nikon D610 has a full frame 24-megapixel sensor just like the one in the still-current Nikon D750, but thanks to this Amazon UK deal it's WAY CHEAPER. The D610 has a fixed rear screen compared to the tilting screen on the newer D750, but otherwise there's little to choose between them.

Nikon D610 body only, just £699 –  £500 saving
The D610 is like a simpler sibling to the Nikon D750, but brought back for the holiday sales at a massive discount to make this the cheapest full frame DSLR you can buy. It's also still a great camera.
UK dealView Deal

The D610 may be a few years old now, but it's still got what it takes. Its rear screen doesn't tilt, but its a larger than usual 3.2-inch display with 921k dots. The D610 also has a 6fps continuous shooting speed, dual card slots and is fully weather-sealed. Like other cameras of its era, it doesn't shoot 4K video, but it can capture in full HD at 30p/25p/24p.

If your main interest is stills photography, this D610 deal offers you the chance to get a full frame Nikon DSLR at a price unlikely to be seen again. If you've been dreaming of going full frame but never had the cash, now's your chance!