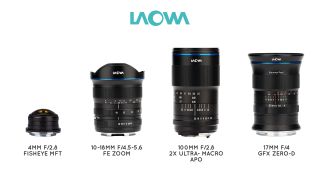 Venus Optics, the company behind Laowa-branded lenses, has announced that four new optics are currently in development.

The company claims the Laowa 10-18mm f/4.5-5.6 FE Zoom is currently the widest zoom lens available for Sony full-frame E-mount cameras, such as the Sony A7 III and Sony A9. Aimed primarily at travel photographers, the lens features a 130º angle of view and a rear filter slot, together with an aperture ring that can be de-clicked for video recording.

The Laowa 100mm f/2.8 2X Ultra Macro APO, meanwhile, also produces an imaging circle that satisfies the dimensions of a full-frame sensor. It's the second 2:1 macro lens in the Laowa lineup, and will be made available in Canon EF, Nikon F, Pentax K and Sony FE mounts.

All four lenses will make their first public appearance at the Venus Optics booth (T225) at the Beijing P&E Imaging Fair next month. Prices are still to be confirmed but the first samples from the quartet are expected to start shipping from the middle of the year.