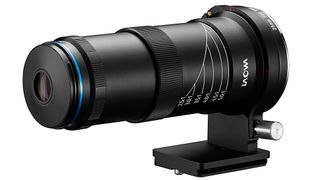 SEE IT AT THE PHOTOGRAPHY SHOW 2018

We often talk about 'true' macro lenses to help separate optics that have a maximum 1:1 reproduction ratio from the raft of others that offer some kind of close-focusing capabilities. But, as Venus Optics reminds us with its latest Laowa lens release, the world of macro photography doesn't stop at lifesize reproduction.

The Laowa 25mm f/2.8 2.5-5X Ultra Macro Lens is a close-focusing lens with a difference, in that it offers a magnification range between to 2.5x to 5x. This allows you to reproduce smaller details more easily than conventional macro lenses, with the further claim of an extended working distance allowing you to keep a safe distance away from any live subjects.

Read more: 8 bizarre lenses you can use on DSLRs and mirrorless cameras

This also means the lens doesn't stand to interfere with the lighting of your subject, which is useful as it's not been designed with the same kind of internal focusing mechanism that's common to many other modern macro options.

The optic employs an eight-element, six-group design, with a single low-dispersion element among these. It promises "outstanding image sharpness across different magnifications" and reduced the chromatic aberrations, while other draws include a respectable f/2.8 aperture and compatibility with both full-frame and cropped-sensor systems.

Most macro lenses offer 1x magnification (1:1 reproduction ratio), which means that they can image a subject on a camera's sensor at the same size as it appears in real life. In practice, the term 'macro' is applied to any lens that has a magnification down to 0.25x (1:4 reproduction).

The company has already made the new lens available to pre-order from its website, in Canon EF, Nikon F, Pentax K and Sony E mounts, although Micro Four Thirds and Fujifilm X-series users can order it with an adapter that will allow them to use it on their bodies. The company has also made a rotating tripod collar for the lens available as an optional extra.

The lens is priced at £399 in the UK, and at $399 (excl. tax) in the US, and shipment will commence from late March. But if you fancy getting your hands on one before that, you'll be pleased to know that the optic will be at The Photography Show next week.

Read more: The Photography Show 2018: What you need to know