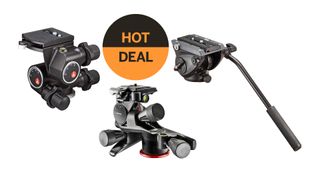 The Cyber Monday camera deals are now in full sight, and we've spotted serious savings on various Manfrotto products – including some great prices on the manufacturer's tripod heads.

These are just some the amazing Amazon Cyber Monday deals on photography kit – including great offers on Manfrotto tripods, so make sure to get some feet to go with your head!

First up, there's the XPRO Geared 3-Way pan and tilt head, which is available for a cool £34.75 saving…

Manfrotto XPRO Geared 3-Way Pan/Tilt Head: £104.25 was £139
Light and precise, thanks to its use of strong and rigid technopolymer, the XPRO Geared Head weighs just 0.75kg but can support a payload of up to 4kg. Micrometric knobs will help you accurately set the camera in its desired position, while the levers will quickly enable large framing adjustments. In the box, you'll find the common 200PL photographic plate, which won't need switching between different Manfrotto tripod heads. UK deal View Deal

Another geared head option is the 410 Junior model, and this is on sale for £36 less - which is a classic, much-loved, geared head:

Manfrotto's 410 Junior Geared Head is made from aluminium and is built to last, and its ingenious micrometric knobs will help you get the desired angle every time. This head offers a complete range of movement – you can pan in three directions – and a locking system will help you move the axes quickly and safely. Other features include a levelling bubble, and a 410 quick release plate is included in the box. UK deal View Deal

For an all-purpose tripod head, then there is a great discount on this award-winning X-Pro 3-way head... which is down to just £66.75:

A 28% saving can be had on this flexible tripod head from the leading Italian maker. Precise control comes courtesy of the X-PRO's enhanced design, with three levelling bubbles and friction controls on the tilt and portrait axes that will allow you to fine-tune your image framing and composition. Once the camera is ideally positioned, locking knobs will hold everything securely in place. X-PRO's lightweight yet sturdy aluminium body weighs means it can support up to 8 kg of equipment, while its retractable levers mean it won't take up too much space in your camera bag. UK dealView Deal

Finally, for anyone who wants to shoot video rather than stills, then there are two superb deals on Fluid Heads with incredible discounts on each:

With professional fluid cartridges on both pan and tilt axes, every camera movement will be smooth, controlled and precise. Although light in weight, this model can bear up to 5kg of equipment and has a wider platform for HDSLR bodies, while the sliding plate has travel for balancing interchangeable lens cameras. As well as a 6.4mm standard fitting, this product has an easy link 9.5mm connector for fitting an external monitor or other accessories. UK deal View Deal

Get £62 off this pro video head for camcorders and DSLRs. The product's variable fluid mechanisms will offer complete smoothness and control while shooting, and fast camera connection and setup will be a breeze thanks to the sliding top plate. The PRO Tripod Video Head has a 12.2lb weight capacity, and an easy link connector for attaching an external monitor or other equipment such as lights or a microphone. And thanks to the 9.52mm female thread, the head can be combined with all photo tripods. UK dealView Deal

If you need some feet to go with your new head, then there are great deals on Manfrotto tripods as well – including two of the manufacturer's best enthusiast tripods being offered at fantastic prices…

Manfrotto 190XPRO Tripod: £119.25 from £199.95
Save 25% on the Manfrotto 190XPRO in this amazing Cyber Monday deal. This professional-standard four-section aluminium tripod is listed at £199.95, but has come down in price to just £118.99 – perfect timing for some winter landscape photography! The collapsible horizontal column mechanism means you can easily switch orientations and the quick power locks on the legs will keep the tripod rock-solid. The 190XPRO has a maximum height of 160cm and weighs 2kg. Tripod head not included. UK dealView Deal

Now this is a great deal – 39% off one of the best tripods in its price range. Manfrotto's 055 offers better-than-ever stability and, thanks to its horizontal column mechanism that can easily be extended, versatility. The quick power locks on the legs will keep the tripod stable at all times, and mean you can deploy or pack up the tripod in no time at all. Other features include a bubble level which rotates around the centre column, and an easy link connector for attaching photo or video accessories like lights or a reflector. The 055 aluminium 3-section tripod has a max height of 170cm and weighs 2.5kg. Tripod head not included. UK dealView Deal