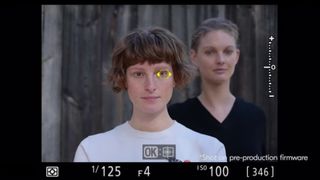 After teasing the technology since the beginning of the year, Nikon has finally released a firmware update for its full-frame mirrorless Z-system cameras to deliver eye detection autofocus.

Firmware version 2.0 for the Nikon Z6 and Nikon Z7 introduces three main feature improvements, all of which revolve around autofocus. The headline feature, though, is the company's much touted Eye-Detection AF.

This will detect and focus on human eyes using Auto-area AF in both single and continuous modes, even when the subject is frequently moving or when their face is partially obscured in the frame. If multiple subjects' eyes are detected, the multi- or sub-selector can be used to specify which eye to track.

We tested the technology ourselves at The Photography Show earlier this year and found it to be spookily good at recognizing, tracking and maintaining focus on a subject's eyes:

"When we tried the eye-tracking AF it proved unnervingly accurate, locking onto a subject's eyes and maintaining focus on them as they moved their head, switching to full-face focus if the subject moved further away, or moved in such a way that they eyes weren't visible, as our video clip shows."

Other improvements introduced by firmware version 2.0 include improved AF performance in low light situations for both stills and video shooting.

Nikon promises faster autofocusing and an extended AF detection range from -1EV to -2EV with the Nikon Z7, and -2EV to -3.5EV with the Z6. Further, when the Low-light AF function is enabled, the Z6's detection range is improved from -4EV to -6EV.

The third big addition in the firmware comes in the form of full-time autoexposure at each camera's top continuous shooting burst rates, 9fps and 12fps on the Z7 and Z6 respectively.

To download the free new firmware and deploy these features (plus some additional minor changes and improvements), visit the Nikon website.

Nikon Z6 vs Z7 - which should you buy?
Nikon's eye-tracking AF in action
Nikon Z7 review
The best Nikon camera in 2019