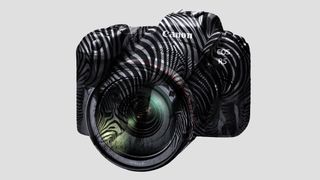 While Canon revealed new specs about the Canon EOS R5 this week, it was careful not to spill all the beans just yet. However, thanks to a YouTube video that has since been made private, we now know that the R5 will feature zebra peaking – a crucial tool for serious videographers.

A handful of other details on the Canon EOS R5 was also leaked in the video, including the fact that the camera can process 8K video into higher-quality 4K – again reinforcing the video horsepower of the highly anticipated new camera.

• Canon EOS R5: Everything we know

The hands-on video was spotted by Canon News, but it was quickly made private – no doubt at the request of Canon directly. This comes as no surprise, since no outlet has yet been allowed to physically handle the camera, and some of the features described and demonstrated in the video have yet to be announced by the camera.

The most exciting of these is the fact that the R5 will be Canon's first interchangeable lens camera body to feature zebra peaking. Working in a similar fashion to focus peaking, this function adds an overlay to the screen and EVF to visually indicate areas that are overexposed. These areas are highlighted with striped patterns (hence the zebra name) to show where highlight clipping is occurring.

Also of great use to filmmakers is the View Assist function. This will enable you to shoot flat footage while seeing a preview, while recording in Canon Log, of how the footage will look after it has been graded.

Perhaps most intriguing, though, is one of the listed "newly announced features" in the video – which, as it turns out, wasn't announced along with the other Canon EOS R5 specs this week. According to the video, the R5 can "process 8K video into higher-quality 4K video (up to 120fps)". That's some heavy duty oversampling.

Of course, none of this is official until it's confirmed by Canon – though with the manufacturer having given us a specs update twice in the past two months, we may not have long until we hear it straight from the horse's mouth.

Canon EOS R review
The best cinema cameras in 2020: stepping up to full scale filmmaking
The best 4K camera for filmmaking in 2020 for photographers, vloggers, pros