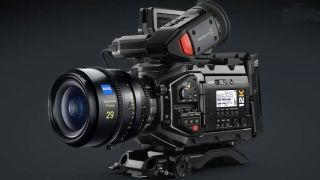 With Canon having just unveiled full details on its 8K EOS R5, and Sony about to launch the A7S III, Australian video specialists Blackmagic Design has gone four steps better by unveiling a 12K video camera. Using its own sensor, the Blackmagic URSA Mini Pro 12K rewrites all the current rules for cinema shooting – and will do so for under $10,000/£10,000  (AU$19,745 in Australia).

The high-quality output outperforms other cameras in its class by some margin – and is likely to be particularly useful to filmmakers for cropping the footage in postproduction for 4K or 8K output. 12K captures around ten times more detail than 4K, and about 2.5x more detail than 8K.

The new cinema camera becomes the third generation of the URSA Mini Pro, and the family resemblance is obvious from the outside. But this camera has been completely rebuilt from the outside - and Blackmagic have produced their own 12K sensor with a massive 80 megapixel resolution. The sensor uses an array in which there are equal numbers of Red, Green and Blue photosites.

The company boasts that the camera has been built for a RAW workflow using the companies own Blackmagic RAW format and its own DaVinci video editing software. The result is that despite the resolution, the video can be edited on a laptop.

The key features of the camera include:

• The non-Bayer Super 35 sensor design allows you to switch from 4K, to 8K and to 12K in camera - without cropping or changing your field of view

• The new 12K sensor has equal amounts of red, green and blue pixels

• Wireless Bluetooth control via an iOS or Android device

• Ships with Arri PL lens mount - but can be switched to Canon EF or Nikon F lenses.