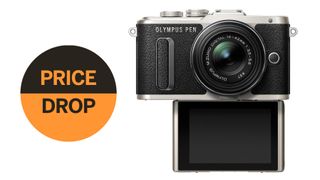 If you're looking for an amazing early Black Friday camera bargain, this one is going to be incredibly hard to beat: right now you can get the brilliant Olympus PEN E-PL8 with 14-42mm lens for an absolute steal at just $289.99!

That's a monster saving of $309 on the SRP for this Adorama Black Friday special, and makes the Olympus PEN E-PL8 even more irresistible than it already was!

The supremely stylish Olympus PEN E-PL8 is aimed at fashionistas, vloggers and lifestyle bloggers – but this ultra-compact Micro Four Thirds marvel is far from style over substance, coming complete with the M.Zuiko 14-42mm f/3.5-5.6 II R lens (a 28-84mm equivalent).

Its key selling point is its size and weight, which is less than a 500ml bottle of water. And unlike most mirrorless cameras, the Micro Four Thirds format actually uses similarly compact lenses – meaning that you get the benefit of smaller and lighter (and cheaper) lenses to go along with the smaller and lighter body.

At 16MP there are other cameras with more pixel power, but that resolution is more than enough for everyday shooting (and even medium-sized prints) – and the 3-axis in-body image stabilization gives you an impressive 3.5 stops of stability.