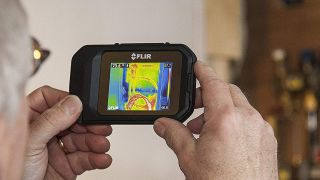 The best thermal-imaging cameras allow you to see and measure temperature differences accurately and from a safe distance. They are useful for identifying heat sources in very dark or otherwise obscured places, whether you’re trying to identify issues to save on your heating bills. Thermal imaging cameras have  been in the news recently for trying to identify infected individuals in a crowd, by picking those that have high feverish temperatures.

An infra-red thermal camera will enable you to explore your world in a whole new way. Beyond the visible spectrum, there is an unseen world of heat radiation. Arty infra-red film photographs aside, the practical uses of the tech traditionally belonged only to military & professional budgets. But now anyone can access thermal imaging. But do note that if you simply want to measure temperatures, you may actually want to read our guide to the best infrared thermometers.

For the most part, the cameras works like regular ones, except that invisible IR light is translated to a visual “thermogram.” Thermal cameras still have image sensors with pixels, but starting at lower resolutions (e.g. 80x60 pixels, or 0.003 megapixels). This is enough detail to pick out hotspots in wiring, for example, but higher resolutions are always better, especially for thermal imaging at a distance, such as in security and rescue scenarios. The sensors are also of varying detail – 150mK sensitivity means each pixel takes readings to the nearest 0.15˚C, so lower numbers are better.

Thermal imaging works in the dark, or through smoke, but can be fooled by the reflectiveness (emissivity) of a surface. Because IR is part of the electromagnetic spectrum, like visible light, it also has similar properties when it encounters lenses or rain. For professional use, it pays to read up a bit on understanding thermograms, but you’ll understand the basics when you power-on your thermal camera. Depending on the software, you can also take retrospective measurements from the thermal JPEGs.

A very modestly priced way to get hold of FLIR’s patented MSX technology (which boosts the apparent resolution of even low-end sensors), and take advantage of your phone’s connectivity is the FLIR One.

Although there is a ruggedized Pro model, boosting the resolution to 160 x 120 and providing a host of extra features (manual exposure, multiple measuring zones), the standard version is enough to let you discover and measure the temperature visually – not just a useful tool but endlessly fascinating too. Both versions include a timelapse function, though of course that’s limited by the battery life.

While the device looks good enough, there are some inelegant design choices, not least the fact that it uses its own battery and has an independent power switch. On the plus side, that does mean that it won’t steal too much power from your precious phone battery. The knob which you might imagine to be a focus wheel actually adjusts the phone connector’s length to match your phone case thickness.

In summary, busy contractors will want a power bank at the least, or to look further down this list, but for the average user this will be plenty to get a few shots or clips via the easy-to-use app. Your phone’s big touch screen it great for taking touch readings or, with the Flir One Pro, set regions of interest.

This tiny phone add-on provides more resolution and higher sensitivity than the FLIR equivalent (even the Pro one), making it a great choice for contractors, engineers, inspectors looking for that bit more resolution. With adjustable focus, the lens can be set on subjects as far as 550m (1,800ft). That’s not only handy for outdoor pursuits, but allows you to take full advantage of the relatively high resolution to get sharp thermal images at any distance.

While the FLIR One includes a visible light camera (essential to the MSX tech), the Seek CompactPro uses your phone’s camera to provide a split screen picture-by-picture function, which is subject to some parallax issues. On the plus side the 15Hz refresh rate makes for better video (but can raise export issues when leaving the US as it becomes “military grade”). The app can give centre-spot measures, or automatically highlight the hottest and coldest spots in a scene.

With a rugged body that’ll survive a bit of workplace rough-and-tumble, the the FLIR C2 or C3 are good-looking compact thermal imagers well suited to DIYers and contractors. Both have two cameras, a 640x480 optical and the 80x60 IR, allowing it to take advantage of Flir’s MSX technology. This patented method uses an edge-detection algorithm on the higher-resolution visual light image, overlaying this with the IR image to make it much easier to comprehend. The visual camera can also provide a picture-in-picture option. Of course the low resolution boosted with visual only works in good light, so a small LED light is provided, but that only offers limited assistance.

Both versions have a 3-inch touchscreen and can store around 500 images onboard to transfer via Micro USB, but if you can stretch to it, the C3 model adds more analysis features and Wi-Fi so you can get images to your phone and to your software. FLIR’s analysis software, FLIR Tools, allows you to change the color palettes and take readings from 4,800 measurement points in the image files, a little like using the eyedropper in Photoshop. FLIR Tools is available for Windows and iOS and Android, but the Mac version has been discontinued (though you still see MacBooks in FLIR’s promo shots).

Best thermal camera for night use

This is an extremely flexible portable thermal camera with excellent resolution, meaning that it is just as useful at night as during the day. While the FLIR C-Series produces useful images in good light via MSX, this camera can do so at any time since it doesn’t rely on visual light to boost its resolution. Combined with its 15Hz refresh rate (most are 9Hz), it can easily be used to spot animals or people in the dark, or through dense foliage, just like the Predator does! There’s also a 300 lumen LED light on should you want to surprise someone you’ve spotted in the dark.

The simple menu system provides access to other useful features too, like Level and Span adjustments (a little like manual exposure, allowing you to isolate a thermal range), and Emissivity adjustments (manual or pre-sets). The fixed-focus camera works between 30cm (12 inches) and 550m (1,800 ft) and the 2.4-inch color screen is protected with Gorilla Glass. The 4GB memory can capture as many images as you’d need to (you can hold the shutter down if you like). For distance temperature readings you can use the 4x digital zoom (though the resolution suffers).

Featuring a laser and a continuous-scanning IR thermometer, this device is a kind of hybrid between a non-contact thermometer and a thermal imaging camera.

The grip shape is ideally suited to tasks like car maintenance since one-handed operation is easy, and the cool bullseye-shaped laser dot makes it simple to direct the point of interest. The 2.4-inch color screen (refreshing at 8.7Hz) provides plenty of confidence that you’re getting the right readings for your work, boosted by the MSX tech for a sharp view.

The generous battery will provide five hours use in the workshop, and charges via the same USB connector which can be used to offload the saved images – up to 50,000 of which will fit on the built in 4GB. The system also allows for emissivity correction (manually or with 4 handy pre-sets), and includes a tripod mount in the bottom of the grip.

Enthusiast mechanics may prefer to hunt down the cheaper TG165, an earlier FLIR product aimed at this category which still features a laser and IR thermometer, while the near-identical TG275 can perceive an even greater temperature range.

The Seek ShotPRO is a compact IR camera which boasts a much better thermal resolution than its immediate competitors but, unlike some other accessibly priced Seek products, also includes the ability to mix visual light. The technology, SeekFusion, allows you to adjust a live overlay with an on-screen slider, a little like changing opacity in Photoshop layers. It lacks the edge-enhancement of FLIR MSX, but on the other hand the greater thermal resolution means that isn’t really needed.

The Short Pro, like the FLIR C3, is capable of Wi-Fi streaming (it partners with a free app called SeekView), though still boasts 4GB memory to capture stills and video. Even without the app, the 3.5-inch touch-screen can be used with the built in analysis tools; you can create up to three boxes and monitor minimum, maximum and average temperature in each. Using the tripod-mount, this can be handy for watching things change over time.

Given one of the most talked-about applications of thermal cameras it identifying people for search-and-rescue, it seems only right to include a drone in this list. If you’re looking for a (reasonably priced) route into this market, you have a choice between the DJI Mavic 2 Enterprise Dual and the Anafi Thermal, both of which incorporate a FLIR Lepton 3.5 into broadly unchanged versions of the popular drones.

While there are good reasons to like the DJI offering, the Mavic’s scores a few extra points, not least the significantly cheaper price point. In addition its 4K visual camera offers a lossless zoom – good for search and rescue – and there are a total of three batteries are included allowing over an hour of flight time.

If money is no object, however, the DJI is well worth a look too, especially for nervous fliers since it has collision-avoidance systems (though these only work in good light).