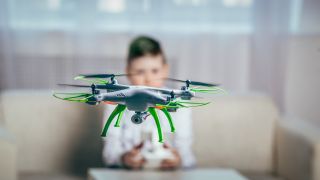 As an adult, choosing the best drone is a taxing compromise of price, features and quality. If you’re choosing the best drones for kids, you also need to consider safety and age-appropriateness. There’s also the tricky matter of price; you’ll no doubt wish to keep it down, but you’d love the user-friendly functionality and overall quality that pro devices bring...

As the feature list increases, the more this can be a complication. With that in mind, this list is clear on where the drone in question is best operated, and the age group it is intended for.

One thing we’d like to add here; many toy drones are built on the same, ‘drone-on-a-chip’ platforms bought from wholesalers and then superficially branded by toy manufacturers. My son had a flying yellow Minion with the same yellow IR teardrop 'controller' as some in this list. It’s not good or bad per se, but it does show it’s a different world from the prosumer.

So then, here are the best drones for kids that you can buy - whatever their age or your budget…

Unbelievably easy to operate, it’s easy to understand why (perhaps a little optimistically) the box suggests an 18-month old could fly it. As is the case for many of the drones in this price range, supervision is key.

The actual flight is magically simple – just hold the controller between your fingers and the drone responds to your movements, using its altitude lock to maintain height. Intervention, however, is needed to connect the device to the USB charger via fiddly connectors, so perhaps your kids might need a few more months of life-experience. It’s definitely best used indoors, and the propellor guards are good quality.

Another concern is the lightweight prop guard. Sure, it gives a few more seconds flight than similar products, but at the cost of making the props a little easier to access for little fingers. They’re also somewhat prone to failure, so practice in larger rooms is recommended (and avoid expansive hand gestures as you talk!)

Compact and robust, this drone is not especially unique (though available in some nice shell tones), but thanks to in-built pressure sensor is capable of hovering without the operator’s help and flying using the pilot-friendly ‘headless mode.’

In practice, that means the drone can be moved around a room using a single control stick, which is easier than most video games! If you do crash, there are good solid prop guards.

On the down-side, the attempt to protect the battery with a flap is tidy but fiddly, and (as is always the case with tiny drones) don’t be fooled by the claims of 16 minutes' flight time – this is just a doubling of the (optimistic) eight-minute time for one battery since there are two in the box! That is, nevertheless, pretty good value and still a decent flight time.

Another child-friendly drone that cleverly gets round the seven-minute maximum flight time per battery, by supplying you with no fewer than three battery packs and two charger leads in the box. However, changing batteries could be easier - and you may need a patient adult to help out here The model is available in red, green or blue - so you can pick different colors if you are buying more of these to keep siblings happy. Great value and performance for the price.

Equipped with all the features familiar amongst small toy drones the Nano is just, well, even smaller. Sure, that means the battery is smaller too, which takes a toll on the flight time, and inevitability there are implications for damage.

That, though, is true for most drones on this list, but not all can clip into a shielded case tucked between the sticks on the remote! Bigger is not always better.

Pilots can also wow onlookers with the one-key stunts; pushing the control sticks inwards results in an impressive flip.

One of the recurring problems with integrating cameras for first-person (FPV) control is providing the screen. Connecting a phone to control a drone means changing the wi-fi settings every time you power on the drone.

Annoying enough with your own drone, but if you’re handing your phone (and passcode) over to the kids every time they fly it can make you want to tear your hair out! The obvious solution? Put a display in the controller.

That is exactly the thinking here – and with a range of around 50m the drone is light enough to be durable, though it’s not for younger kids as the prop guard is a little rudimentary.

The H107D+ is a refresh of the much-loved (and cheaper) H107D, adding headless mode, headlights and a 720P camera.

The Tello shares a lot of tech with Ryze’s parent company, DJI, which is great news when it comes to quality and smarts.

The camera is built into the body offering five-megapixel stills or 720P video – this is as good quality as it gets in the toy market.

As well as the standard version, watch out for Iron-Man branded, and Edu(cational) flavors too.

Naturally, there is the full range of flips and tricks to impress friends, but where it really excels is educational value. That even includes compatibility with Scratch – a block-based visual programming system so computer enthusiasts can learn programming on a phone or tablet in the most fun way possible.

While the robust airframe hasn’t seen an update since 2018, there have been several software updates keeping the app fresh.

Other firms have written alternatives, available in phone app stores, which add functions like panoramic photography and FPV flight.

High-end collision-detection and avoidance systems have been the most talked-about feature on high-end hobby and photography drones.

While this isn’t nearly as sophisticated, by adding a couple of IR sensors to opposite sides of this nano drone’s safety cage, the manufacturers have essentially created a slow-motion hovering hockey puck.

One key take-off and landing from a teardrop remote (which takes watch batteries), or simply throw it into the middle of the room and it’ll begin to hover.

It’s something of a shame that the two-sided sensing is imperfect but, at this price, it’s hard to argue with the cool UFO look. Expect to wait 40 mins to get five to six minutes' flight time via USB charging.

This drone is surprisingly well specified for the price, with a camera able to record 1080P video or adequate stills to a MicroSD card.

Thanks to the GPS chip, it hovers on the spot (outdoors at least) when the controls are released, and has automatic return-to-home. That does make setup a little tricky, but the manual is adequate and following it through worked first time for me.

Once set up, the drone defaults to beginner mode which restricts it from flying more than 30m (100ft) from the operator, though this can be increased via the app.

Sure, the imagery isn’t pro quality, but it is good, and using the features like waypoints and automatic orbit will bring out the surveyor or film-director in anyone.

It can be flown from the (rechargeable) remote alone, or with the assistance of a phone for live video feedback, which is very handy, and Snaptain hasn’t skimped on accessories: two batteries, two chargers, and optional propellor guards for the safety-conscious. The folding legs themselves may also cushion an early blow so, er, enthusiastic young pilots get a second chance after a collision.

The ultimate ‘toy’ drone for older kids and families

OK, strictly speaking, DJI Mavic Mini isn’t a ‘toy’ (though you’ll hear some who don’t fully understand the regulations referring to it as one).

This is leading prosumer drone manufacturer DJI’s first stab at a sub-250g drone (the weight which is the cut off for registration in the USA & China), and it’s amazing.

For older kids, able to appreciate the delicate components which make it up, the gimbal on which the camera is attached makes this, in effect, a real flying camera.

It also records to MicroSD at a maximum of 2.7K – significantly better than HD.

There are also cool automated flights for orbiting video selfies and all the goodness that comes with GPS (automatic return to home, hover in place). Not everyone has this kind of money to spend on a gift, but if you do, it’s a present for the whole family (and their social media accounts).

Parrot, who kicked off the whole consumer/fun drone market with their AR.Drone (enormous by current standards), recently discontinued its toy series to concentrate on the higher end – so sadly the Parrot Mambo is no longer in production.

Mercifully, stock of this unique aircraft is still plentiful, often at fantastic prices, as it makes a brilliant toy.

There is also good availability of spare batteries and so on, but what sets this device apart is not just the high-quality control app (you’ll need a smartphone or optional controller), but its Lego-like attachment interface.

You can instantly clip on an FPV camera, a tiny grabber claw, and even a pellet gun (that fires very safe tiny polystyrene balls). There are also detachable prop-guards for added safety.

On the downside the attachments reduce the nine-minute flight time, but the batteries (and chargers) are better quality than most, clipping in and out without fuss.

The adaptability has also created an almost bewildering array of models, and it’s hard to know which is current – the core aircraft is the same, but going into 2020 it’s the FPV version which Parrot is promoting (even though it’s been around since 2017).