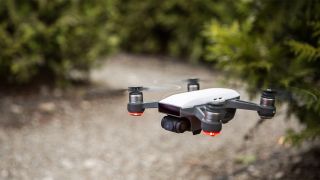 Drones have been one of the most popular gifts over the holiday period – and there are some fantastic holiday camera deals on drones!

UAVs (or quadcopters, as they are also known) are not only much easier to fly than ever – the camera resolution has got much better, enabling you to get great aerial shots wherever you travel. You do have to watch out for the latest drone rules, to make sure that you fly safely and legally, but most of this is just common sense.

The most exciting news in terms of camera drones this year is the very recent launch of the DJI Mavic Mini – a very lightweight 249g drone that has been designed to avoid the need for registration in the USA and the UK. It is a drone that folds up to sit on your hand, but it is a great performer too. As this is a new model, we may not see much discount on the Mavic Mini – but its arrival probably means that the cost of other drones is likely to fall, to keep themselves attractive

DJI Mavic 2 Pro Ultimate Bundle: $1,729
The DJI Mavic 2 Pro is now available in a bundle a whole heap of accessories including a landing pad, backpack, ND filter set and an 64GB memory card.  US dealView Deal

Autel Robotics EVO Quadcopter bundle save $309 $1050
A rival to DJI’s Mavic Pro, Autel’s Evo is a folding, portable drone with a three-axis gimbal that holds a stabilized camera, one that shoots 4K video at 60p. It comes with a range of intelligent flight modes and obstacle avoidance, and can manage flights of up to 30 minutes. This bundle includes a bag, two batteries, spare propellers, guards, remote controller and ND filters.View Deal

Ryze Tello drone save $20 now just $79
Amazing price on one of our favorite microdrones - which can shoot  decent footage from the air, with the minimum of fuss,  and expense. And weighing just 80g, it doesn't need registering with the UK or US authorities either. This drone is always a good buy... but it is now a bargain.
Worldwide deal
$79 in US, £79 in UK, AU$129 in AustraliaView Deal

Ryze Iron Man drone save $40 now just $89
This is a fun version of the Ryze Tello drone that comes with a full Iron Man styled body. No need for registration (as it weighs just 80g), and shoots 720p video and 5MP stills. Perfect for Marvel Comics fans of any age!! This price is from DJI direct, so can be ordered worldwide.
Worldwide deal
$89 in US, £89 in UK, AU$149 in AustraliaView Deal

DJI Mavic Pro Fly More Combo save £349 now £749.99
This is a great Black Friday deal on the Mavic Pro Platinum. This UAV offers a 12 megapixel sensor and 4K video shooting at 30fps, or 720p video at 120fps. The drone folds down, making really suitable for travel. This offer gets you the Fly More kit, which includes the Mavic Pro Platinum, remove controller, 3x batteries, memory card, shoulder bag and other goodies. UK dealView Deal