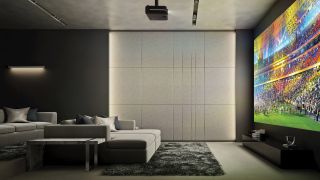 If you want to share your photographs en masse then it’s time to go massive. A video projector will cast your images 100 inches across (or more), and are a great way to serve up JPEGs (and videos) at presentations, events or club meets.

Whether you want to display your shots from a USB stick, or cast wirelessly from a mobile device, projectors make supersizing simple and fun. They come in various shapes, sizes (and prices), so buying the right type is crucial.

There are two key projection technologies. DLP models use a digital micromirror device (DMD) allied to a spinning color wheel to create images. They tend to be competitively priced and because they use a single device, can deliver very sharp pictures. However, that color wheel can cause an artifact known as rainbow fringing (particularly on cheaper models), where color flashes can be seen in areas of high contrast. If you specialize in monochrome, they may not be the best choice.

3LCD projectors use a trio of aligned LCD panels. These projectors give the most cinematic of images, with naturalistic color, but often don’t seem quite so sharp as DLP.

In most rooms, you’ll need at least three meters (ten feet) of space to cast a 100-inch display. If that’s not possible, consider an Ultra Short Throw projector. These sit up close to your screen (or wall), often less than 10cm, but use mirrors to throw a large projection. Remember, in all cases, image resolution will determined by the projector hardware in use.

Finally, consider light sources. Most projectors use UHP lamps. These have a lifespan of around 4,000 hours; they’re bright but will need replacing. Alternatively, a laser light engine will run undiminished for 20,000 hours or more. Low-brightness LED light sources are typically used in ultra-small models.

There are two HDMI inputs, as well as PC VGA and USB. There’s a fair amount of additional configuration on offer. Multiple gamma settings are available, and there’s variable colour gamut selection. A six-segment RGBRGB colour wheel claims to cover 100% of the BT.709 colour space.

Images are pin-sharp and colour accuracy is superb. Black level can be tweaked using the Dynamic Black setting. We preferred it Off, however some might like the denser blacks it produces. For the greatest contrast, keep the lamp setting on Bright.

Not everyone will have room for a conventional projector, but that doesn’t mean you can’t supersize your images. An Ultra Short Throw model can be positioned just centimetres from a wall or screen, and still cast a huge image.

Epson’s EH-LS100 is one of the most advanced UST projectors out there. With a laser light engine, it offers ease of use and longevity, and is amazingly bright at 4,000 lumens, more than bright enough to be used in moderate ambient light. That’s because it’s based on the brand’s EB corporate UST projection range. This also explains its size. This is no compact, and it’s a bit on the noisy side!

Resolution is Full HD. There are three HDMI inputs, as well as VGA, USB  and composite video. The projector works from a distance of just 6cm, but we could effectively fill the best part of an entire room wall from 48cm.

Alexa, is this 4K DLP projector really ready to respond to voice control?

Using the supplied Wi-Fi dongle, you can also stream images directly from a mobile device, using the EZCast app. With a zoom of 1.3x, you’ll need around 3m to throw a 110-inch image. If you have problems running physical leads, the projector can also be used with a Wireless HD connection kit.

A DLP XPR model, image quality is good, although perhaps not quite as sharp as rival 4K models available. Colour vibrancy is high and contrast reasonable. It’s not that bright though, so you’ll want to use it in a light-controlled room.

If you want a 1080p projector with eyecandy appeal, this Darbee model will do it

This mid-range Full HD projector has Darbee Visual Presence processing built-in. For those not in the know, Darbee is used to give images extra bite or deepen colour saturation. It features three presets, each with variable processing strength.

Essentially this enhancement lifts white highlights, gives contrasty edges more definition, and cleans up colour. Whether it’s of any genuine benefit is up for debate, but superficially the end result can look impressive.

Overall, we rate this a solid performer regardless. Beneath the lid is a standard 0.65-inch DMD chip. Tweaks to improve black level performance include Dynamic Black and variable Gamma.

With 3,500 ANSI lumens peak brightness, the projector can be used in a reasonably bright room. Source inputs cover two v1.4a HDMI inputs and USB. Overall, it’s quite the crowd pleaser.

For the ultimate in image clarity, look to a UHD SXRD projector. Unlike cheaper DLP models, Sony’s SXRD panels are natively UHD, with no clever interpolation required to deliver pixel-dense images.

You’ll need a big space for it, though. While beautifully built, the VPL-VW550ES isn’t small. It tips the scales at a formidable 14kg, so you won’t be pulling it from the sock draw to show your holiday snaps – it warrants, nay demands, permanent installation. Connections include twin HDMI inputs plus USB.

Image quality is high, as it should be given the price. Sony’s proprietary Reality Creation Pro image processing really emphasises detail and texture. Contrast ratio is rated at 350,000:1.

Portable with an Ultra Short throw, you can use this battery-powered beamer anywhere

Offering a sharper image than many rival Pico projectors, LG’s Minibeam UST (Ultra Short Throw) LED projector has a resolution of 720p and a brightness of 1,450 ANSI lumens. That’s impressive for projector not much bigger than a ready meal.

Connections are limited to a single HDMI input and USB reader. Focus is manual, via the wheel above the inputs. There’s also a simple Screen Share mode for compatible smartphones, which is an easy way to share jpeg stills.

Image quality if good given the convenience. Colours are bright enough to impress, while contrast is rated at 10,000:1.

You need just 7.5cm to cast a 40-inch display. Move it 16cm from the wall and you get the equivalent of a 50-inch display. If you want something more dramatic, move back to 60cm and you’ll fill a wall.

Of course, the bigger you go, the more pixel break-up you’ll see. You can defocus a little to hide the coarseness, but it's not really a recommended strategy.

Genuinely portable, the Minibeam’s battery will run for around 2.5 hours fully charged. And with an Ultra Short Throw projector you never have to worry about casting a shadow by walking in front of the light.

This budget 4K DLP projector is well worth an audition

Another budget 4K resolution offering, BenQ’s W1700 combines a curvaceous design with plug & play simplicity. Beneath the hood is a standard lamp which offers a 2,200 lumens output, so it’s best used in light-controlled rooms. Contrast ratio is modestly rated at 10,000:1.

With a 1.2x zoom, the projector will throw a 100-inch image from 3.25m. The projector features the familiar 0.47-inch XPR DLP DMD chip, allied to an RGBRGB colour wheel. Fidelity is impressive, courtesy of BenQ’s CinematicColor processor, however there’s a limit to just how much detail this model can extract from the shadows.

Connections include two HDMI inputs, plus PC VGA. The remote is helpfully backlit.

Pocket projectors were all the rage when flatscreens cost more than the monthly shop. But while interest has dulled, they’re still a good option for impromptu screen shows.

The ViewSonic M1 is one of the cutest. This ultra-portable LED projector can stand upright on its own carry handle, and comes with a basic remote, yet still finds room for on-body controls. Connections include an HDMI output and USB, but there’s no Bluetooth support. There’s a MicroSD card slot, and 16GB of onboard storage.

It will run for up to six hours off batteries, but can be powered via the mains.