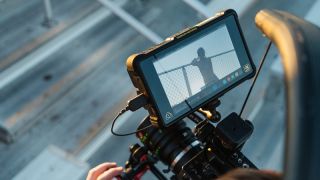 Whether you’re new to filmmaking or a seasoned professional, here are ten key products that will bolster your filmmaking arsenal without breaking the bank (too much).

From tripods to microphones, from filters to external recorders, here is the rundown of the best pro video accessories…

The VideoMic Pro+ is Rode’s latest shotgun microphone that’s designed to pretty much live on top of your DSLR/CSC camera. Building on the success of its popular predecessor, this version has some welcome improvements. Its battery door – a pain on the older version – now makes switching batteries a breeze, and a rechargeable lithium-ion battery is now included as standard. To help prolong battery life when you’re not filming, the microphone will automatically turn on and off with the camera, so long as plug-in power is available. Other new features include a two-stage high-pass filter, a three-stage gain control and a safety channel that's useful when recording in unpredictable environments.

If you want to up your audio game, you really do need to get that microphone closer to your subject. Whether you’re recording a person speaking or the ambience of a trickling stream, most situations will involve using a microphone that isn’t fixed on top of the camera. The Rode NTG-2 isn’t a new microphone – it’s been out for years – but as the old adage goes: ‘If it ain’t broke, don’t fix it.’ This extremely versatile microphone can be used for film, broadcast, music production and voiceover work, all thanks to its wide bandwidth, controlled polar response and low-noise electronics. One thing to note is that if you’re coming from a DSLR or CSC camera, you’ll either need to use an adapter or an external recorder that can accept the professional 3-pin XLR connection.

If you’re filming a person talking, the easiest way to ensure you capture clean audio is by attaching a lavalier microphone to them (ideally a wireless one). The compact receiver on the AVX ME2 system mounts directly into the XLR socket, which saves valuable space and shoe mounts on your camera rig. It also switches itself on and off automatically whenever it detects phantom power from the camera, meaning that once plugged in you can just leave it be. The AVX system also intelligently manages its operating frequencies, always finding two clear frequencies to operate on at any one time, just in case one becomes compromised.

• The best microphones for vlogging and filmmaking

Why invest in audio gear if you’re not going to hear it properly? The last of the audio products on this list is, of course, a decent set of headphones. The closed, circumaural design of the Sennheiser HD 380 PRO provides great passive attenuation of ambient noise (up to 32dB), so you can really isolate the audio you’re recording without introducing any active noise cancellation. Comfort is key when filming for prolonged periods of time, and these headphones are designed with that in mind.

External recorders are extremely versatile bits of kit to have in your filmmaking locker, and the Shogun Inferno is high up there when it comes to widespread adoption. It revolves around a 7in, 1500nit screen, which means it’s easily viewed during daylight and capable of showing HDR video – something the little screen on the back of your camera simply cannot contend with. If your camera is restricted to compressed 8bit 4:2:0 recording, outputting and recording on the Inferno is going to get you back up to glorious 10bit 4:2:2 – four times the amount of colour information per RGB channel. Depending on what your camera is, you can currently go up to recording in 12bit CinemaDNG. Truth be told, this recorder will most likely outlive your camera body.

Video tripods don’t tend to change that much. Sure, new models might be slightly lighter or stronger than their predecessors, but it’s rarely something that’s technologically groundbreaking. Cue the Sachtler Flowtech 75 carbon fibre tripod, saving our future filmmakers from the dreaded backache we all currently seem to face. This set of sticks has been dubbed “the world’s fastest tripod legs,” thanks to a rapid deployment system where all three legs extend simultaneously. Locking mechanisms at the very top of the tripod save your back, while the carbon fibre design means it’s lightweight but strong enough to have an impressive payload of up to 20kg.

There are so many sliders out there, but when it comes to quality and versatility, the Rhino slider really is the option that springs to mind. This entry-level bundle comes with 24in rails, but those who find they need to travel further can swap in 42in rails (available separately). The Rhino Motion, which allows you to program precise and accurate motion-controlled movements from one end to the other, is also included in this bundle. It’s built-in battery is good to go for up to seven hours, which makes it suitable for most shooting days, although you can top it up by connecting a power source to the USB connection if you need to.

To get a shot with a shallow depth of field, perhaps in a bid to aid your storytelling by focusing the viewer’s attention on something in the frame, you need to open up your aperture. ND filters allow you to do so without altering the ISO or shutter speed to compensate for overexposure. The SLR Magic variable ND filter reduces light by 1.3 to 6 stops, and unlike some rival filters, has hard stops at either end of filtration, which makes life easier when shooting ‘run-n-gun’ style. Opting for the largest size of 82mm means that you shouldn’t need to buy any others when you change lenses – instead, just purchase cheap and cost-effective step-up rings for use with smaller diameter lenses. One ND filter to rule them all!

Thanks to falling prices and the dexterity of the shots that you can create with them, gimbals have had a huge surge in uptake over the past few years. The Zhiyun Crane 3 LAB is one of the more recent models, but it's great value for money. A gimbal is an essential add-on if you are to do smooth handheld tracking shots with your camera - and this model offers a payload or up to 4.5kg.

Finally, you need to be able to carry all of this gear. Although this camera backpack is marketed towards photographers, it’s more than capable of serving a variety of filmmaking needs. As an example, it will hold a Sony FS5 and A7S II bodies, plus three lenses, batteries, cards, microphones and a laptop. Thanks to the generous amount of padding on the straps, it’s extremely comfortable once on the shoulders. You can also attach a lightweight tripod to the front of the bag so, apart from lighting, you’ve got everything you need for a shoot in one backpack. The Pro Runner also complies with most cabin luggage allowances, which makes it ideal for those short trips abroad.

The best microphones for vlogging

The best 4K cameras for filmmaking

The best cameras for streaming