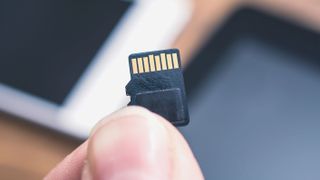 As phones and cameras have got smaller, so have the memory cards we use to store all those pictures and videos that we take. The microSD format is the smallest of the common memory card types around – and it is fast becoming the most pervasive. But how do you get the best microSD card deal? There are always some great buys to be had – if you shop wisely (and we'll do all the research for you!)

You will find microSD cards used in Android camera phones, drones, action cameras, dashcams, home security cameras and many more electronic devices (such as the Nintendo Switch). The card is as small as your finger nail - but it can still store plenty of data in its small body – with one terabyte options now being available. But to get value for money, it is smaller capacity cards that are often the best buy.

Not all cards are the same, even after you have chosen how many gigabytes you want yours to store. Some are much faster and reading and writing data... which can be particularly important if shooting action sequences with high resolution cameras, or recording 4K video. These capabilities are described by a whole load of confusing letters and numbers...

But let's cut through the technospeak, and give you a rundown on some of the best microSD card deals that are currently around…

If you are looking for a microSD card that can be used as an extension to the application memory of your phone, then make sure that you pick one that is designated A2 rather than A1. A1 cards are fine for storing big chunks of data (such as pictures and video)... A2 cards are better at lots of rapid reading and writing of little bits of data - and this is what you need to run most apps. This is a great, sensibly-priced A2 card that will be a perfect partner for your Android smartphone.

3. SanDisk Extreme PLUS 128GB microSDXC A2

Another great choice for Android phone use

The Sandisk Extreme Plus offers a very slightly higher read speed than the Sandisk Extreme - but the differences on paper and in practice are marginal. However, this A2 card is still a great pick for use in a mobile as an extension to your phone's memory – as long as the price is right.

This microSD card is amazing value for money, and the perfect choice for any camera or other device where you just want more device. This does not promise the bells and whistles of A2 app speed, or UHS-II video suitability - but it still delivers very respectable transfer speeds. This is a bit of a bargain for the everyday user.

Another good budget buy for camera use

Another great all-round choice for photographers who want a new microSD card but who don't want to a fortune for this. This offers very respectable read and write speeds - so can handle all but the most demanding task.

This line of microSDs have been designed for use in devices where you might need to record thousands of hours of video – and want this done without any worries about reliability. This means this is a great choice for the dashboard camera in your vehicle – or in your smart home security camera.

In many cases it is better to use several smaller capacity cards rather than one big one – and as they are less popular large capacity cards can work out relatively expensive. This Sandisk Ultra card, however, is great value if you choose the 400GB version – making it a good choice if you really need a card which can store your complete archive of images.

If you want the fastest data transfer speeds a from a microSD card, then you need to look for a card that uses the newer UHS-II standard. You can see the difference between UHS-I and UHS-II as the latter has two rows of metallic contacts on the back, rather than just one. This physical difference helps with the faster transfer rate... but you do need a UHS-II compatible camera to take advantage of the extra speed. This Lexar card is therefore a good choice if shooting 4K video or high-speed sequences with a compatible camera or camcorder.