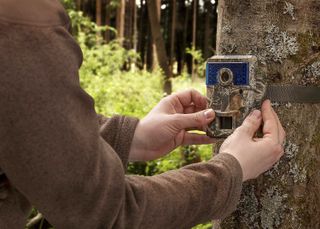 Looking for the best trail camera? This guide will tell you what to look out for, pick out the best camera traps around, and tell you the best deals on each.

Wildlife watching can be tough. Animals and birds are often skittish and will get spooked if it spots, or hears, a human lurking nearby. What's more you can spend hours or days without seeing anything. The best trail cameras or nature cameras make the job easier by acting as a remote pair of eyes, or rather, remote image capture device.

Unlike your standard digital camera, trail cameras are activated by a subject’s movement and even body heat – the result is that you don’t have to physically be in the location where you’ve set your trail camera up to get the shot you want – indeed a shot that wouldn’t otherwise be possible. Think of them as home security cameras for the great outdoors.

They’ll also be able to capture images whether it’s day or night, without getting cold or exhausted, protected by a rugged build that will prevent moisture ingress or damage should the camera slip from its perch.

While some degree of protection against the great outdoors is guaranteed, as when choosing any camera, however, do take note of the pixel count and also the lens offered by a prospective trail camera, as well as the speed of its capture – critical for photographing wildlife, obviously – and its recovery time.

Some trail cameras also offer infrared flash – light on a wavelength that won’t be picked up by the subject. You’ll also want to make sure it has sufficient memory and power to get the job done – just like any regular digital camera, plus that it is easy to set up and retrieve images from.

With the above in mind, we’ve got 10 recommendations for the best trail cameras around…

The best trail cameras in 2020

The latest option in trail cameras from the Bushnell brand  features the advantage of two image sensors – one optimized for sharp and rich images during the day, and the other – you guessed it – optimized for night use, with high contrast clarity promised at up to 80ft in the dim. Being a camera for the great outdoors, it goes without saying that this one is also built to survive in both the cold and the heat. The Dual Sensor (DS) product gets its ‘No Glow’ moniker courtesy of LED lights that are described as ‘nearly invisible’ – thus making the unit ideal for both viewing wildlife and, conveniently, security purposes. Features Full HD video capture at up to 60fps with audio too, plus 30 megapixel color camera with a triggered response time of just 0.2 seconds.

Lower cost 'Low Glow' option is perfect for most uses

To No Glow or to Low Glow, that is the question posed by Bushnell's superb new Core DS trail cameras. The difference between this model and the No Glow alternative simply comes down to the infrared LEDs used by the units for night time imaging. As the name suggests, it means that one is more visible to animals to the other (and also the humans). For situations where you just can't afford to miss the shot, then the higher wavelength of the No Glow option is a must (and this is also good when the light going off my disturb neighbors). But the lower cost Low Glow option is probably more than suitable for capturing nocturnal goings on of wildlife in your backyard.

Prime
$98.80
View at Amazon
$109.98
View at Walmart
$119
View at Adorama
See all prices (5 found)
30m (100ft) detection distance,
Operates in temperatures from minus 20°C to 60°C
Powered by bog standard AAs
No wireless capability
No geo-tagging of images

If you’re dipping a toe into the world of trail cameras here is an affordable and reasonably featured entry point that takes up to three still images when triggered, with intervals adjustable between one second and 60 minutes, or alternatively between five seconds or a minute of HD quality video. Powered by eight regular AAs, rather than rechargeable lithium battery or solar power, its manufacturer nevertheless claims these could last up to 12 months, so you won’t have to keep popping back to change them. Another bonus is that its motion-activated sensor can spot subjects up to 100 feet away, its operation can be set to 24 hours or day or night only, it has an infrared flash, the 16-megapixel resolution CMOS sensor provided is good enough to do the job and it comes with a one year warranty.

don’t be put off by the Aggressor’s product name, which translates into a trail camera with a rugged camouflaged exterior that looks like it would withstand a fight with a stag. The five-way button control panel is illuminated for operation in the dim, while its responsiveness – a 0.2 seconds trigger speed and 0.5 seconds recovery rate – also makes for a sound choice. Like the budget model we also get a useful 100-foot range – which its infrared 32 LED flash can also reach – and a promised one-year battery life. Resolution has been usefully bumped up to a more detailed 24 megapixels (there’s also a 20MP version) plus we get a color rather than black and white LCD. Video has, however, remained a standard 1280x720 pixels, with all data written to an SD card of up to 32GB capacity.

As the name indicates this model is interesting for the fact that it harnesses the power of the sun. Yes, it’s solar powered. Like other models in its range it comes with the core features of an ultra fast trigger speed of 0.07 seconds, plus 42 low glow LEDs. The resolution this time around is a modest yet perfectly serviceable 12 megapixels, while the flash range again extends up to 100ft. There’s an internal battery provided, though it can also be powered by six AA batteries, not included, should the sun presumably fail to shine. The ability to detect subjects up to 80ft away, time lapse movies, blur reduction built in, 720P video with sound plus a 2-inch screen tick the boxes for the attendant features we’d expect from a trail camera at its slightly more premium price. The Link-S version of this solar-powered trail camera adds a 4G connection, for remote monitoring.

$79.99
View at Walmart
Prime
$129.99
View at Amazon
Prime
$189.98
View at Amazon
See all prices (4 found)
Compact dimensions yet plenty of sophistication
Keeps shooting whether it’s day or night
Video without sound,
LCD screen is for configuration rather than viewing

An entry level model in the aptly named Spypoint range of trail cameras, this one can capture 10 megapixel photos (hence the model number) and HD video in color during the day, plus black and white by night, due to its infrared camera functionality. Like others in its manufacturer’s line up it is powered by 6x AA batteries, though a rechargeable lithium ion pack is available as an optional extra, as is, like all the options here, the SD media card onto which stills and video are recorded. Once again we have a curved motion sensor to improve the angle of the unit’s ‘detection’, a 2-inch screen, HD video (albeit here without sound), a six image multi shot mode, a flash that can reach 90 feet, plus a subject detection range that can be adjusted from just 5ft to 80ft, and all within rugged plastic casing.

US brand Stealth Cam has been in the trail camera market for around 15 years and offers this affordable entry-level option with a 10 megapixel stills option – you can also opt for 8MP, 4MP or 2MP shots from the unit – plus HD quality video with between and five and 180 seconds of audio. With a respectable trigger response time of 0.5 seconds, there is a backlit LCD for making selections from the camera’s menu, plus a 16:9 image ratio. As with competitors, ‘no glo’ (hence the ‘NG’ suffix) infrared flash can illuminate subjects up to 100ft away, while this camera purports to offer advanced blur reduction. Usefully there is an external power jack for operation via a 12v battery; otherwise power comes courtesy of 8x AAs. Durable weather proofed housing is a must, and thankfully included here.

$89.99
View at BHPhoto
Prime
$159.98
View at Amazon
See all prices (3 found)
Inexpensive all rounder
Suitable for beginners and beyond
Video not Full HD,
20MP shots are generated from a ‘mere’ 3MP sensor

Resembling the face of a Cyberman or some other Doctor Who automaton, this recent intuitive-to-use update from the Spypoint brand features a built-in 20-megapixel camera and the ability to illuminate night-time subjects without unduly distracting them – thanks to what are described as 48 ‘super low glow’ LEDs. Video is a high definition 1280x720 pixels rather than Full HD, while the motion activated sensor can register subjects up to 80ft away. A certain amount of flexibility is offered via the addition of a time-lapse recording mode. Just don’t forget a ready supply of Jelly Babies to while away the time with when you’re crouched hiding in the bush.

The pitch here is again found in the name, with this unit claimed as the world’s first 4K-trail camera

If you’re looking for the ultimate in image quality for your wildlife photography and videography then seeking out the highest resolution possible at the time is an obvious choice. This unit, resembling a piece of alien hardware from Star Trek, is pitched as the world’s first 4K digital trail camera, offering 3840x2160 pixels video in daylight. Not only that, but it boasts a trigger response of 0.4 seconds, a whopping 30 megapixel still image resolution plus a useful infrared flash range of 100ft. A burst mode allows between one and 9 images to be captured sequentially, while a hybrid capture mode as it sounds can record both stills and video in 16:9 wide image ratio when this camera is triggered. The only obvious downside is that the Stealth Cam unit requires 12 AA batteries for power, adding to the weight and bulk.

The best camera bags and cases