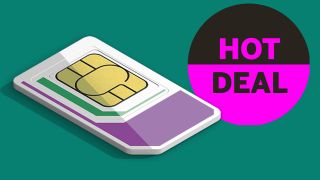 This amazing SIM only deal was THE best mobile phone deal in 2019... but it got withdrawn at the end of the year. Thankfully, the monster money-saving offer has made a comeback for 2020 – and it is perfect for anyone who uses lots and lots of data.

This is one of the best SIM only deals we have ever seen UK mobile phone users. British mobile phone network Three has always offered decent deals on its mobile phone contracts – and particularly if you are after lots of data.

But its already-tempting SIM only tariffs got even more tempting as you can get connected for just £10 a month for unlimited calls, unlimited text messages, AND unlimited 4G data. That is great for anyone who likes to share lots of images from their camera phone.  This used to be a great deal when we first spotted it at £11 per month, but now this starts at just a tenner.

Doesn't matter whether you natter away the hours, type out text messages like there's no tomorrow, or stream box sets on your commute every day – this 24-month SIM-only deal has got you completely covered. You pay half price for this for the first six months, at just £10 a month, and then £20 for the remainder of the contract.

What's more you can use your data and calls in 71 countries around the world without paying a bean - and that includes places like United States, Australia, Germany, Ireland, Hong Kong, Spain and France - using Three's Go Roam service.. So you can post all your photographs to Instagram without worrying about the cost as you tease everyone back home about your latest trip.

Three are also say that there SIMs are already 5G ready at no extra cost - a useful bonus if you are considering buying upgrading to one of the best 5G phones now that Three is rolling out its superfast 5G network.

Unlimited Everything Three SIM-only deal
Unlimited 4G mobile data | Unlimited calls | Unlimited texts |
£10 a month for the first six months, and then £20 a month for the rest of the contract. This is easily one of the best SIM-only deals around at the moment in the UK. You can chat to your heart's content, text until your fingers go numb, or keep downloading those Netflix series until your phone's memory bursts.
UK dealView Deal