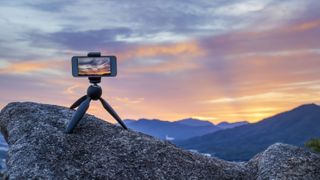 The best iPhone tripods don't have to cost a fortune, and they can pack up small enough to fit in a shoulder bag or even a jacket pocket. And even the simplest, most affordable smarphone support can really help you explore new kinds of photography that weren't possible before

It's true that the best camera phones can take really good pictures, hand held, in all sorts of light. But with a with a solid camera support, you can do so much more:

• Capture night shots. The best camera apps will give you manual control over your phone camera to allow a low ISO setting and a long exposure. With this, you'll be able to capture top-quality night shots, cityscapes and traffic trails. A tripod is necessary here to prevent any blur during the exposure.

• Shoot a video. With your phone on a tripod, you can frame a scene and be in it too. An iPhone tripod is a must-have for bloggers and vloggers.

• Get a selfie without the arm-stretch. Put your smartphone on a tripod, and you can put it on a wall, a restaurant table or any other flat surface for a more natural and relaxed selfie.

• Try a timelapse. With your camera phone locked down in a fixed position you can speed up a sunset, capture traffic trails at twilight and bring busy city streets to life.

The best tripods for regular cameras are just too big and heavy for these pocket-sized devices, so smartphone users will be looking for something much more pocketable and portable.

Also read: The best gimbals for your smartphone or camera

The best iPhone tripods and supports in 2020

Manfrotto markets its PIXI mini tripod and universal smartphone clamp as separate items, but it generally works out cheaper to buy these two items as a complete kit. With this, you get the tripod itself, which comes with an integral ball head and is suitable for use with cameras, plus the smartphone clamp, which attaches via a standard 1/4-inch socket, and can accommodate phones of up to 83mm in width. It’s a good solution, thought the limited range of movement for the ball head means you can only shoot with the camera phone in landscape orientation. You need the more advanced Manfrotto Pixi Evo 2 and its more advanced ball head if you need to shoot portrait shots (most camera phone tripods are designed for horizontal shooting).

This combined smartphone grip and mini-tripod is sheer genius

This is more expensive than other iPhone tripods in this guide, but it does more than one job. It’s a spring-loaded grip that opens wide enough to fit even a fat smartphone and clamps around it securely, while in the base is a tripod socket for a regular tripod or the tiny pocket tripod included in the kit – you can also use this with the legs folded in as a camera grip. In the top is a Bluetooth shutter button that’s actually built into a tiny remote you can slide out to fire the shutter remotely! You do need to position bigger phones carefully in the clamp to stop the tiny tripod from tipping over, but otherwise this is sheer genius.

This isn't a tripod, but the cleverly designed Manfrotto TwistGrip universal smartphone clamp does let you attach your camera phone to any regular tripod, including the Manfrotto Pixi above. It also folds virtually flat for stowing away in a pocket. You simply twist each end to pivot the clamping jaws around, so they can attach to any phone of up to 82mm in width. The clamping action itself is nice and solid, thanks to a locking screw at the rear. Immaculately engineered from high-grade aluminium and coloured dark grey, the TwistGrip looks and feels a quality item. It can mount on any tripod via its 1/4-inch screw socket, and has a cold shoe at the top for attaching accessories, like the Manfrotto Lumimuse LED light.

Turn your TwistGrip into a mini smartphone video rig

$29.95
View at Focus Camera
$55.97
View at Adorama
No price information
Check Amazon
See all prices (3 found)
Enables a firm and natural hold
Accepts additional accessories
Quite expensive
Can't be used as a stand

This two-piece kit comprises a handle and ‘accessory bar’ for Manfrotto’s TwistGrip universal smartphone clamp. The grip secures to the clamp via a 1/4-inch tripod thread, but you can also use the accessory bar horizontally between the two. The latter T-shaped configuration enables you to add one or two other accessories like an LED light and microphone – the two essentials for any smartphone vlogger – via two cold shoes. The components are well made from high-quality aluminium and rubber-grip surfaces. Overall, the Manfrotto ergonomic handle and accessory bar for TwistGrip adds versatility and natural handheld usability to the TwistGrip. This is a great combination for handheld video and vloggers, though you’ll still require a separate tripod for anything other than handheld shooting.

A tiny but effective flexible friend for your camera phone

With suitably small and phone-friendly dimensions, the Joby GorillaPod Mobile Mini weighs in at just 32 grams. It’s also Joby’s cheapest ‘tripod’, yet features the company’s trademark flexible legs, constructed from a series of movable joints. As such, you can stand it up like a mini tabletop tripod, or wrap its legs around other objects to cling onto them. It comes complete with a phone mount so it’s an all-in-one solution. The only real drawback is that each leg is only 60mm long, so you can only attach this relatively small GorillaPod to fairly thin objects.

Flexi-legs at a tempting budget price

So, we'll get the disappointing news out of the way first. This "octopus-style" tripod does not, in fact, have the eight arms of an octopus. It's named for the octopus because its legs are flexible, similarly to Joby's Gorillapod (also misnamed, now we come to think of it...), and it can grip onto unusual surfaces in order to provide a stable support for your smartphone shots. The clamp can take phones up to 6 inches wide, which is more than enough, and it provides a secure hold. The whole ensemble is nice and lightweight, making it great for travelling light, and it's well worth considering thanks to its competitive price.

A phone case that has tripod legs

This is a tripod that you can carry around permanently with your smartphone – as it doubles as a protective phone case. However, as well as its photographic uses, the StandPoint is perfect for perching your phone on a surface – a train or airline tray-table being the obvious candidates – for hands-free video as well as video calls and photo reviewing. We like the case’s protective nature, and the fact that it works with wireless charging pads. The only drawbacks are that the StandPoint’s tiny tripod legs do require a flat surface, and don’t allow many angles.

Unlike Joby GorillaPods, the Joby GripTight ONE Micro is a tabletop tripod with rigid, non-flexible legs that swivel around. This makes the whole tripod very small and slim when folded away, while enabling a secure base when the legs are fanned out for the standing position. It’s a neat and very streamlined design, the only catch being that the operating height to the bottom of the phone is only about 30mm. Although there’s no height adjustment, the main clamp does enable you to pivot the phone forward and backward and from side to side, albeit with a fairly limited range of adjustment. You therefore can’t use the phone in upright, portrait orientation.

This is novel – a tripod with magnetic feet for metallic surfaces!

The relatively long legs of this GripTight GorillaPod have nine flexible joints. That’s a significant step up from the GorillaPod Mobile Mini, and enables greater height when using the stand as a tabletop tripod, as well as allowing you to wrap the legs around larger objects, such as tree branches and fence posts. On top of that, the ‘Magnetic’ edition also incorporates magnetic feet, so you can easily attach the GorillaPod to anything metallic. The phone clamp is the same one that’s featured in the GripTight ONE Micro Tripod.

This bigger Gorillapod has a rotating phone clamp

This chunky GripTight GorillaPod Stand PRO gives very stable and solid support for smartphones and comes complete with an up-market phone clamp. It features a locking screw for adjusting the clamp to the exact size of the phone, and this screw also enables rotation for portrait and landscape orientation while shooting. However, a little care is needed to ensure the clamp doesn’t loosen its grip on the phone during rotation. It’s rather bigger, heavier and stronger than smaller GorillaPod siblings, but is still good value at the price. If you unscrew the phone clamp, the legs are also suitable for use with a compact camera or small DSLR.

The Telepod is bigger but versatile, and can even hold accessories

The sophisticated GripTight PRO TelePod can be used in many and varied ways. The comfortable hand grip has three longitudinal sections that hinge out to become a set of tripod legs, with two operational angles on offer. The centre column extends, with three telescopic sections that lock and unlock via a simple twist mechanism. Up on top, there’s essentially the same versatile head as featured in the GripTight Gorillapod Stand PRO, but this time a cold shoe is added, which can hold an LED light, microphone or other accessory. The kit also includes an ‘Impulse’ wireless remote shutter button, which connects to most iPhone and Android smartphones via Bluetooth.

Prime
$199.95
View at Amazon
See all prices (2 found)
All-in-one rig for sound and light
Works with all cameras
High price

Here’s an all-in-one vlogging rig for anyone after versatile, well-lit visuals, and superior sound. It’s all built around the brand’s world-famous GorillaPod – a flexible, strong tripod – which is here joined by two additional, flexible arms to create a GorillaPod Mobile Rig. On one arm goes Joby’s Beamo Mini LED light that goes up to 1,000 lumens and last 40 minutes, and which comes complete with diffuser. Wavo Mobile – Joby’s compact and toughly-made microphone – attaches to the other, or sits on a cold shoe atop this kit’s GripTight PRO 2 smartphone clamp, which supports phones in either landscape or vertical orientation. Although it’s designed for smartphones, remove the clamp and it can work just as well with action cameras, mirrorless cameras and bridge cameras.