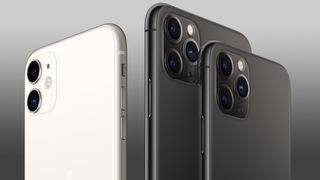 2019 has been an incredible year for camera phones. If anything it’ll be remembered for being the year of the multi-camera array, with the majority of flagship phones now featuring three of more rear-facing cameras.

2019 also introduced us to a new concept in camera phone technology: the Time of Flight camera. Incorporated into phones like the Huawei P30 Pro and Samsung Galaxy S10 5G, these depth-sensing cameras teamed with powerful scene processing algorithms mark the next step in producing ultra-realistic background bokeh blur simulation, allowing you to shoot portraits on a phone that look almost indistinguishable from the image quality produced by a full-on interchangeable lens camera.

The first major phone release of 2019 was the Samsung Galaxy S10 back in early March. It set the year’s benchmark for all-round camera phone performance, with its triple rear-facing cameras giving a wonderfully versatile 26mm wide, 12mm ultra-wide and 52mm telephoto focal length selection. Add in Samsung’s comprehensive camera app and the S10’s uncanny ability to produce stunning image quality every time you tap the shutter button and it was going to take a lot to outdo Samsung spectacular new flagship.

As it happens, it was less than a Month before we had a new leader on our best camera phones list: Huawei. After 2018’s smash hit P20 Pro broke all records for phone camera image quality, its successor, the P30 Pro, has a tough act to follow, but Huawei managed to smash it out of the park. With innovations like the aforementioned Time of Flight camera, along with 5x optical zoom and spectacular high ISO / low light performance, the P30 Pro redefined what was possible from a phone camera.

However, not everything went Huawei’s way in 2019. Amidst growing security concerns regarding the Chinese state-owned tech giant, the US forced Google to exclude future Huawei handsets from the Google Play app store, dealing a huge blow to the company.

While this turn of events did not immediately effect current phones like the P30 Pro, fast forward to September 2019 and the launch of the next big Huawei handset, the Mate 30 Pro, and the Google ban was now in full force. Consequently with no Google Play store access, the otherwise technically superb Mate 30 Pro is now only a viable option for the Chinese domestic market.

2019 also proved that you didn’t need to fork out for a premium flagship phone to get stellar camera performance. May saw the launch of the triple-camera OnePlus 7 Pro. It managed to get close to the performance of top-tier phones like the P30 Pro and Galaxy S10, but for significantly less cash.

Fast forward to October and the mildly refreshed OnePlus 7T Pro added a new super-macro mode and improved video stabilisation to keep pace with the competition.

It wasn’t only OnePlus that was out to give you maximum camera bang for your buck. If you liked the look and performance of the Huawei P30 Pro, but not the price, you only had to wait until July for a cut-price alternative from Huawei’s sub-brand, Honor.

The Honor 20 Pro offered up a similar shooting experience and image quality to the P30 Pro, but for little over half the price. We were mightily impressed at the performance from the 48MP f/1.4 primary camera, 3x optical zoom telephoto camera and 13mm-equivalent ultrawide camera, along with the premium notch-less display. If you could overlook the political upheaval surrounding Huawei and by extension, Honor, the 20 Pro was a smart budget buy.

Summer also treated us to a return to form from Sony. The once-giant industry player needed a reboot in 2019, and the Xperia 1 was just that. Its fresh new design and stunning 4K 21:9 HDR notch-less screen grabbed our initial attention. But it was how Sony carved a new camera niche for the handset with its video-focused camera and pro-inspired Cinema Pro video recording app that really wowed us. With the Xperia 1, you get a first-class vlogging phone with video options you won’t find in rival flagship phones.

Prior to 2019, Google’s Pixel phone range only catered to a high-end price point. That all changed in May when we were treated to the Pixel 3a, for just $399. Sure, it only had a single rear-facing camera, but you still got Google’s class-leading image processing to assure you of excellent image quality, no matter what the lighting or shooting conditions.

The phone’s design and overall specs may have trailed the more feature-packed competition from Honor and OnePlus, but being in the Pixel club means you’re first in line for Android updates when most mid-range Android handsets are usually at the back of the queue.

If anything, the Pixel 3a was the standout Google handset in 2019. The new flagship Pixel 4 arrived in October, and was the first Pixel phone to sport more than a single rear-facing camera, but Google played it too safe by only upping the camera count to two, rather than the more typical three or more.

The phone’s overall design also lacked wow-factor, and while a new long exposure astrophotography shooting mode was hugely impressive for its low-light image clarity, it wasn’t enough to stop the Pixel 4 feeling overpriced for the camera hardware on offer.

We’ve been impressed time and time again by the torrent of stunning camera phones launched over the past year, but one phone has managed to rise to the top of the pile: the iPhone 11 Pro Max.

2018’s iPhone Xs had trailed its top Android rivals for camera performance, but the new triple-camera array boasted by the 11 Pro Max didn’t just match the competition, it bettered them where it matters most: image quality. Apples restrained approach to image processing with the iPhone 11 Pro Max is so refreshing when many top-tier Android phones are locked in a battle for maximum eye-popping sharpness and retaining every pixel of highlight and shadow detail with overzealous HDR. By contrast, the iPhone 11 Pro Max's images look more true-to-life and never show signs of being over-processed - a rare feat these days.

The addition of a new ultrawide camera is just brilliant for travel photography, landmarks and spectacular interiors. It rounds off a truly spectacular all-round camera phone, and what we think deserves to be crowned the best camera phone of 2019.

• The best camera phone in 2020
• The best DSLRs for beginners, enthusiasts and pros
• We help you choose the best mirrorless camera
• The best 4K cameras for filmmaking
• These are the best 360 cameras to buy