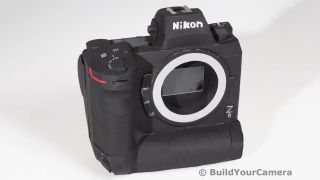 Nikon's newest mirrorless camera is here… well, sort of! This Nikon Z9 has been constructed by an industrious paper crafter on Instagram. And while ultimately it may bear little resemblance to the unannounced camera, it still provides some fun food for thought in the current climate.

The work of the inspired BuildYourCamera on Instagram (as spotted by Mirrorless Rumors), this Nikon Z9 prototype was first teased back in March after the account had been idle for almost a year and a half.

"It‘s been a long time my friends! I had this model lying around for a long time. I didn‘t have the time past year to finish it and present it to you at all," posted BuildYourCamera last month, before revealing the finished article this week.

• Build your own paper Olympus camera

"Here it is! The Nikon Z9 Paper-prototype! I hope Nikon is going to make the real Z9 just like this. I think it would be perfect like this." Indeed, the creator seems to have designed the camera to remedy some of Nikon's recent decisions that not everybody agreed with.

"I love this company even though they haven‘t made the best decisions with some things like the MB-N10 [Z battery grip], leaving off any control dials and shutter release buttons and of course leaving the Nikon D780 without any kind of battery grip… I hope they come out this year with a fast pro-mirrorless-camera, that blows the D6 and Sony A9 II off the table. So imagine what this paper-camera could be."

Accordingly, this Nikon Z9 features an integrated battery grip (complete with shutter release and control dials) – and, quite brilliantly, it even features removable dual CFexpress cards!

So, how does this prototype stack up to what we know about the real Nikon Z9? While precious little has even been whispered about this camera, the latest camera rumors claimed that it would be a professional-grade mirrorless camera that could succeed the Nikon D6 flagship DSLR, and be the professional full-frame brother to the Nikon Z7 and Z6.

However, we don't expect it to appear before 2022 (in time for the next soccer World Cup) and it's arguably much more likely that it won't appear until 2024, when mirrorless technology would be mature enough for it to replace the D6 outright.

Until then, enjoy BuildYourCamera's brilliant mock-up – and visit the Instagram account to see other great cardboard cameras like the Leica M10 complete with a 35mm lens!

The best Nikon camera in 2020: including Nikon DSLRs, Nikon Z and Coolpix
The best cameras for professionals in 2020: which pro camera system is best?
Camera rumors in 2020: what cameras are coming, officially and otherwise!