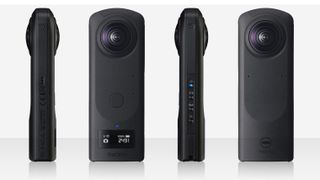 Ricoh has revealed full details of the company’s new 360 camera, ahead of the CP+ 2019 photo trade fair in Japan. The big story is the new Theta Z1 use of twin 1.0-inch sensors, which are much larger than the 1/2.3-inch sensors used in the Theta V and other consumer-level 360 cameras.

The two 20-megapixel sensor are mounted back to back behind ‘overlapping’ 180+ degree lenses to produce merged 360-degree still images and video footage.

The Theta Z1 supports both raw and JPEG formats, capturing still images at a resolution of 6,720 x 3,360 pixels. 360 4K movies are captured at 30fps at a resolution of 3,840 x 1,920 pixels, which is lower than many of the Theta’s rivals can manage, like the amazing Insta360 ONE X, but its large sensors should compensate with some of the best quality yet seen from portable 360 cameras. This is helped by a rotating 3-axis image stabilisation system.

The body is made of magnesium allow for extra robustness, and it features a small display panel for checking the battery level, number of shootable images remaining, the shooting mode and more. The in-built lithium-ion battery has a quoted life of 300 shots or 60 minutes of video, and there’s built-in storage of 19GB.