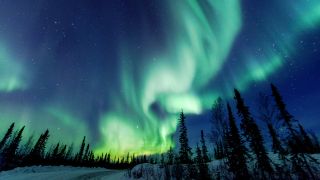 Though spherical videos may theoretically be perfect for the VR age, few people own VR headsets. No matter, because this emerging format's early experiments are all viewable on phones, tablets and desktop browsers on platforms including Facebook, YouTube and Vimeo. Just drag the screen to explore these addictive first-person 360° perspectives on everything from wildlife and rare natural phenomena to extreme sports, documentaries and immersive journalism.

1. 8K 360 video of the Lunar Eclipse and Aurora Borealis near Fairbanks, AK

They said it couldn't be done. They were wrong. When a 'super blue blood moon eclipse' was about to occur over the US and Alaska during peak Northern Lights season, landscape and astrophotographers were wondering whether anyone would be intrepid and/or lucky enough to capture a reddish moon against a backdrop of green… in -35°C. Videographer William Briscoe then confounded all expectations by creating a 360° time-lapse of the event in 8K resolution. Briscoe created a rig of multiple DSLRs to expose for the northern lights and the landscape, and used a separate DSLR and a telephoto lens to capture the eclipse, combining it all later. Look to the top-left for the blood moon while the aurora borealis rages in an arc across the sky underneath, and note how the sky changes colour as the eclipse ends and the aurora fade to nothing. The stirring music doesn't hurt, either.

Since it brings a powerful first-person perspective, 360° cameras were always going to be popular with adventurers and extreme sports people wanting to share their passion in excruciating detail. Using the new GoPro Fusion 360º camera, wingsuit pilot Jebb Corliss dives out over Perris, California here, in 'rodeo' formation with another pilot. Where to look? Up at the plane as they jump out? At the other crazy wingsuiters? Or down at the ground? That's the beauty of the 360º format. Since no soundtrack has been edited, the audio is basically wind in the microphone, so it's best watched on mute. But this raw video is a wild ride that demands a rewatch.

3. Mosul From Above: Fight against ISIS from the sky

We hear reports from war zones all the time, but there's only one way to get a feel for how big a place is; watch a 360° video. This extraordinary footage from the BBC puts the viewer in a Havoc helicopter during a live attack mission by the Iraqi army as they fly over Mosul searching for ISIS militants. Although it's raw footage of a complete mission from take off, it comes with a commentary from BBC journalist Joe Inwood, who generates his own pace by fast-forwarding through some parts, pausing occasionally to briefly annotate the view in an effort to explain the conflict (and to point-out return fire). The New York Times attempted something similar in a war zone with The Fight for Falluja in 2016.

That the 360° format brings a powerful eyewitness dimension is unquestioned, but it can also be used to shine a light on areas of the world that humans almost never visit or see. That's the case here with 360° Kamchatka Volcano Eruption, shot by National Geographic (a channel that's really embraced the 360° format on YouTube) in remote Kamchatka Peninsula in eastern Russia. The viewer gets to see into the erupting Klyuchevskoy volcano, one of the world's most active. Note the captions 'floating' in the clouds... and don't forget to look behind you during the approach to see Klyuchevskoy's dramatic V-shaped shadow.

5. Fossil Hunters of the Gobi

360° recording is also being used to make short documentaries. Though it includes lots of simple first-person 360° footage, Fossil Hunters of the Gobi also finds some engaging ways to splice together museum archive footage overlaid on to a 360° landscape. Sure, it's heavily edited, but this all-you-need-to-know video about a famous palaeontology expedition to the Gobi desert provides an excellent example of how 360° video can form the basis for a 360° canvas format ripe for the VR future.

Here's more proof that the 360° format isn't just for titillation, but can also be a brilliant way of reporting news. Published by The New York Times a couple of years ago, this dramatic 360° video of large piles of confiscated ivory worth US$100 being burned by the Kenyan government. An utterly bizarre scene in 360°, the fire – lit by President Uhuru Kenyatta – was an attempt to show the world that Kenya wants to end the illegal trade in ivory that is decimating the wild elephant population in East Africa. It's a simple, short film of raw footage shot from just a couple of different camera positions, with no commentary.

Given that the International Space Station's ISS HD Earth Viewing Experiment permanently broadcasts live 4K video of Earth to the surface, it's surprising how long it took for the astronauts to embrace 360°. Just last August 2017 saw the first use of a 360° camera onboard when Russian cosmonauts Sergey Ryazansky and Fyodor Yurchikhin took one outside for part of a seven-hour spacewalk. During the video you get to see the astronauts release three small satellites into low-Earth orbit, although the lasting impression is of just how quickly the ISS travels.

Why tell when you can show? Though that's always been the theoretical advantage of video over radio or the written word, it's only with the birth of 360° cameras that it's finally possible in a raw, unedited way. It's spawned some exceptional storytelling and unique journalism, none more so than this simple yet powerful video showing boats packed with refugees landing on a beach on the Greek island of Lesbos. It comes with commentary, and occasional pieces to camera by the reporter, who wanders freely around the camera while the harrowing scene plays out all around. The BBC tried something similar with Calais Migrants: What's it like in the ‘Jungle’?

Have you ever seen a total solar eclipse? A rare occurrence, it's one of the most dramatic things it's possible to see or experience, and yet it's almost impossible to share what it's actually like. OK, so the view of the Sun being eclipsed by the Moon for a few minutes (called totality) is limited by the wide-field view of this 360° camera, and also by its relatively low resolution. However, what this video from Indonesia does show is the approach of the Moon's shadow. As Earth’s rotation rushes it towards the Moon-shadow’s point, it looks like the Sun is setting in 360° all around, with a V-shape during totality. Note the way it's edited; a short intro and, critically, a simple set-and-forget tripod position between the viewers and the spectacle. 360° cameras also allow all-sky videos of eclipses.

One-part product demo video, one-part world-record attempt, this 360° video shows something truly groundbreaking. It's essentially a show-off showreel by Richard 'Iron Man' Browning, an English inventor whose company Gravity created the Daedalus Mark 1, a body-controlled jet engine power suit that uses six miniature jet engines to achieve vertical flight. In this 5k 360º video, Browning launches and sets off across a lake and returns in one piece. A nice touch is an outtake at the end in which Browning sinks into the lake halfway through a previous, failed attempt.

Read more: How to take 360-degree videos and photos