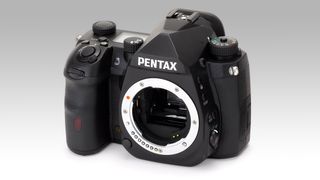 The new Pentax flagship APS-C DSLR, revealed as part of the manufacturer's 100th anniversary celebrations, looks like it might be "behind schedule", according to a report from Japan.

Scheduled for a release in 2020, with a purported summer announcement, the latest news suggests that the Pentax flagship might miss its targeted release date – perhaps by some margin.

That's according to Japanese photographer Kimio Tanaka (via the folks at Pentax Rumors), who has a very good track record when it comes to insider information regarding Pentax products.

"The appearance of 'Wolf Shonen Pentax', which doesn't come out easily, saying 'I'm going to come out'? Do I have to wait patiently?"

Tanaka gave no hints as to what could be causing the delay, though with events such as Sigma abandoning the K-mount last year – 10 days before the camera went on display at the Pentax Meeting 100th Anniversary Special, no less – it's a possible indication of trouble in paradise.

Precious little is known about the camera, other than its APS-C sensor (which we hope will see an upgrade from the 24MP sensors in Pentax' current APS-C lineup), and the fact that it possesses Shake Reduction image stabilization (evidenced by the gold "SR" emblazoned on the front).

The form factor looks like a cross between the Pentax KP and K-70, with a grip that is slightly less pronounced than the latter, but it's sleeker and more svelte than either predecessor. It incorporates both a rear joystick and a top LCD panel, but its rear screen does not tilt or articulate.

While Pentax cameras are a bit of an acquired taste, it's a brand that's quite dear to us here at Digital Camera World – so we certainly hope that this one does materialize sometime this year.