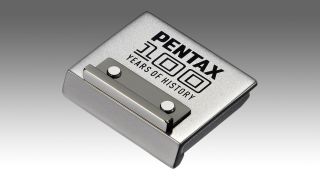 On 27 November, Pentax will celebrate its 100th anniversary. And what better way for one of the quirkiest brands in the business to celebrate its centenary than with a limited edition hot shoe cover, costing £40 / $50.

"This accessory features a metallic base treated with a honing process that creates a high-grade finish," says parent company Ricoh Imaging. "It is marked with the PENTAX 100 YEARS OF HISTORY logo, treated with a mirror-finishing process.

"To enhance the user's fingerhold, it comes with a separate part which serves as a swaging device to secure the cover more firmly to a camera's hot shoe. Finished in gunmetal gray, this accessory is the perfect partner for either silver or black camera bodies, and adds a stylish touch to the camera."

According to DC Watch, the O-HC171 Hot Shoe Cover will be released on 04 October and limited to 3,000 pieces worldwide. "The price is open. The selling price at the direct sales site is 5,400 yen".

Many of the major camera manufacturers have their quirks. Fujifilm, for example, is refreshingly candid and up-front about its development process, evidenced by the recent Fujifilm X Summit where the company's chiefs were frank about their inability to make a 33mm f/1.0 lens, so they made the Fujifilm XF50mm f/1.0 instead.

Pentax, though, is a different breed still. Its primary plan to commemorate its 100th birthday involve the release of a new flagship APS-C DSLR – a very… bold move, in a world that is ever-more mirrorless (to the point that Sigma has stopped making K-mount lenses for Pentax bodies).

Still, we're sure that the founders of Asahi Optical Industry Joint Stock Company back on 27 November 1919 had no idea that the brand would still be in existence a century later (albeit owned by another company). And we're absolutely certain that they had no clue that milestone would be celebrated with a hot shoe cover.