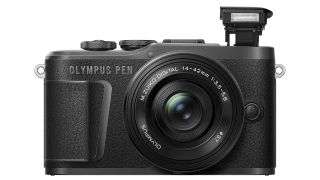 You can read our full Olympus PEN E-PL10 review for our verdict on this brilliant new body that's ideal for travel and street photography, as well as blogging, vlogging and content creation.

ORIGINAL STORY: Olympus has been busy today, announcing not one but two new cameras – including the Olympus PEN E-PL10, the newest entry in the company's fashionista-focused line of blogging cameras.

As far as the PEN E-PL line goes, though, it's very much a case of 'if it ain't broke, don't fix it'. The cameras are perennially popular among style-conscious bloggers – particularly fashion, food, lifestyle and travel writers – thanks to their ultra-compact size and great performance.

The only real change seems to be to the Art Filter functions. These Instagram-style filters have long been a favorite feature on Olympus cameras, but the issue was always that you couldn't control how strong the effect was – meaning that some filters could be more than a little aggressive.

In the all-important style stakes, the E-PL10 ditches the classic black-and-silver option and now comes in a very sleek 'Batmobile' black, along with the same white and brown options as last year's version.

The E-PL10 adds a very welcome Fine Tune option to Art Filters, so you can dial them down to make effects more subtle. Though it's disappointing that we don't, as is typically the case, get an all-new filter, leaving the total at 16.

Still, the camera retains all the ease and accessibility that has made it an evergreen performer among casual and entry level photographers – including the Advanced Photo mode, which automates intricate features such as multiple exposure and Live Composite to enable everybody to use them.

Olympus tells us that the E-PL9 will continue to be sold alongside the E-PL10, which will be available at retailers in late November (and through special online channels, in some territories).

The camera will be available body only for £549, as well as the familiar kit with the M.Zuiko 14-42mm f/3.5-5.6 EZ Pancake zoom lens (a combo that's "lighter than a 500ml bottle of water") for £649. Availability and pricing have yet to be announced in US and Australia.

The best Micro Four Thirds lenses for your Olympus or Panasonic camera
What is a mirrorless camera?
The best Olympus cameras