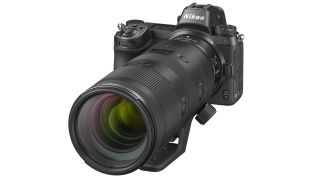 Every mirrorless camera system needs a good lens range to back it up, and while the Nikon Z 6 and Z 7 are terrific cameras accompanied by some terrific native Z-mount lenses, there are some surprising gaps in the lens range, including – amazingly – any full frame telephoto zooms of any description.

At the moment, while Nikon Z 50 owners can get the rather good APS-C Nikkor Z DX 50-250mm f/4.5-6.3 VR lens, full frame Nikon mirrorless camera owners will need to use the Nikon FTZ adaptor and existing DSLR lenses for longer range subjects, and that's surprising given that it's more than a year ago that these full frame mirrorless cameras were first announced.

The new Nikkor Z 70-200mm f/2.8 will have 21 optical elements in 18 groups, including no fewer than six ED (extra low dispersion) elements and two aspherical elements. It will have an internal zoom mechanism and no focus breathing (especially important for video), and Nikon’s high spec ‘S-line’ build quality.

Externally, there will be an OLED data display and two function buttons offering access to 21 different camera functions. The minimum focus distance changes with focal length, which isn't ideal, ranging from 0.5m to 1m. The filter thread is a surprisingly modest 77mm, and the new lens is almost 200g lighter than Nikon’s DSLR version, weighing in at 1,360g without the tripod collar attached. The dimensions are 89mm (width) x 220mm (length).