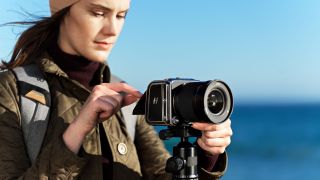 So although Hasselblad's announcement of the new Hasselblad X1D II 50C has caused a stir, there's more to medium format than the latest digital cameras. Older cameras are also  back in vogue as photographers rediscover the joys of simple analog hardware…  but don’t necessarily want the expense and hassle of an analog film  workflow.

It’s not the first digital back Hasselblad has produced for its older modular film cameras, but this one will be bang up to date, with Hasselblad's latest 50-million pixel imaging technology and a tilting screen. Using it could hardly be simpler as it will clip straight on to the back of a Hasselblad V-system camera in place of the regular film back, with no extra cables or connections.

The CV II 50C will be entirely self-contained, capturing high-res digital images straight from your old and cherished 500CM – and its lenses.  We bet you’re glad you  didn’t put it on eBay now.

The Hasselblad CM500 and V-series cameras are in a unique position in the digital world. Their modular construction  means it’s possible to swap  analog film backs  for digital backs  in a way that’s not possible with classic DSLR and rangefinder cameras.

‘Camera’ is rather a big word for what is effectively an interface between  the digital capture back and the lens. The wafer-thin 907X is really just one module in a system, which is why it’s so incredibly small and light.

So why get the 907X and not an XCD? You could get both or either and mix and match to your heart’s content. Hasselblad could hardly have anticipated all  those years ago that it’s modular camera system would have such importance in the future, but but the CV II  50C digital back and 907X camera look set to breath new life into an old camera system, and in a way then lets it work seamlessly with the latest hardware. Bravo!