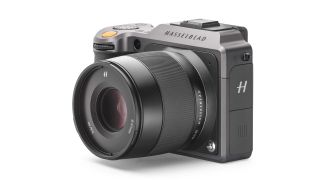 After the tantalizing tease of "the next chapter in Hasselblad history", the company has announced the Hasselblad X1D II 50C – surprisingly, a light refresh of the original  50-megapixel X1D, but at a shockingly low price of £5,400 / $5,750.

Most were expecting that the company would unveil a 100MP monster to rival the Fujifilm GFX 100 – and many predicted that the new camera would actually use the same 102-megapixel Sony IMX 461 medium format image sensor.

Instead, the Hasselblad X1D II 50C sticks with the 50MP medium format CMOS sensor of its predecessor "to keep medium format photography portable with its compact build".

It's not without a hint of irony that the promotional video for the X1D II makes the statement, "When image quality is everything, bigger is better."

Though we're somewhat taken aback by the company's decision not to push the megapixel count – especially with multiple full-frame mirrorless and DSLR cameras flirting with the 50MP threshold – the X1D II does feature a few welcome if incremental updates.

Chief among them are a new 3.69 million-dot OLED electronic viewfinder – an improvement over the XGA, 2,6 million-dot EVF of the original, which also benefits from greater magnification of 0.87x. Further, the menu system is now accessible when looking through the EVF.

The rear touchscreen has also received a boost, upped in both size and resolution to 3.6 inches (from 3.0) and 2.36 million dots (from 920 thousand). In addition, the refresh rate has been raised to 60fps for live view.

The user interface has been improved, too, with pinch-to-zoom, swipe image browsing, drag and drop focus point placement, pinch/spread focus point size changes, and faster overall responsiveness. Indeed, the camera is quicker in general, with a notable 46% reduction in startup time.

One thing that's only marginally faster, though, is the burst rate: 2.7fps, compared to the positively glacial 1.7-2.3fps of the original model. That said, it does boast fast shutter sync speed of 1/2000 sec for flash.

In terms of video, there's not much we can tell you. The only specification from Hasselblad says, "Video: To be enabled at a later date", and we'd imagine that the company would be only too eager to tell us if it could shoot 4K.

Perhaps the added weight comes from built-in Wi-Fi, USB and GPS functionality, along with support for UHS-II in its dual memory card slots and the ability to charge the battery in-camera via USB connection.

While staggeringly low for a Hasselblad camera, the price is appropriate in the context of its Fujifilm rival. Available for pre-order now, the camera will ship in July.