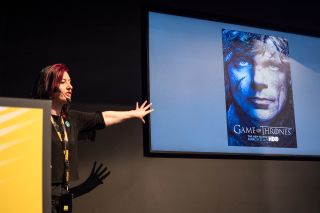 Among the many fantastic talks at The Photography Show 2019 – from White House photographer Pete Souza to BBC wildlife legend Gordon Buchanan – is the fascinating talk by Game of Thrones' Principal Stills Photographer, Helen Sloan.

Sloan's talk, which takes place at 15:40 today at the Nikon stand (C11), is a fascinating insight into her career and the decade-long task of capturing a million photos for the TV juggernaut, which begins its final season next month.

"It’s just come to the end, you know? It’s like ten years, and it’s ending now, and I’m all dead emotional," said the Irish photographer on the opening day of the show. "It's 360 degrees of cool stuff. It is art on an industrial scale, it is stress on an industrial scale, but it’s amazing. And there’s nothing that I’d rather do."

Working as a stills photographer

Sloan's talk takes in every aspect of her career as a photographer, including her not so glamorous break into the world of stills photography – a story that's definitely worth the price of admission.

In addition to going through her daily responsibilities on Game of Thrones, she also goes into detail of her workflow, editing and post-production process, having to metatag the million images she's taken, and she also covers the prickly issue of copyright for a photographer working on set. Her presentation is also full of advice that rings true for any practising photographer, not just someone working in the big time.

"It lets me, as a photographer on a daily basis, be a jack of all trades – so landscape in the morning, studio portraits in the afternoon – it keeps it fresh. And that’s an important thing for anybody in photography: keep it fresh. Because if you wake up and you’re like, ‘Ugh, god, another wedding,’ maybe don’t do shoot a wedding that Saturday – go and shoot someone’s cat, or go to Crufts and have a bit of craic.”

"There's no ladder in this. And I think the worst part of trying to break into any freelance stuff is constantly having doors closed on you, or having things that you thought were going well suddenly fall away. And the best bit of advice is there's no ladder – it's not like management where you're going in and you're going up through the ranks… It's a climbing frame.

"I have been at the top of the climbing frame going 'Yeeeeah!' for ten years, but now I am literally down the slide, I'm on my arse in the mud, I'm not working, the phone's not ringing, I don't know what's going to happen next – and I was doing my dream job. So I just think, the best advice I have is get that out of your head that it's a constant climb. There will be plateaus in any kind of freelancing, and that's probably the best skill I have learned is to relax about, take a breather, and then get back at it.”

As a speaker on the Nikon stand, it should be no surprise that Sloan uses Nikon kit through and through. And though she plans to invest in one of the mirrorless cameras, mainly for the silent shooting function (she currently has to use
a 'blimp' housing to dampen her shutter noise), she's currently a DSLR shooter.

"People often ask, favorites cameras, favorites lenses. So, Nikon D850 in studio – beaut. The 1.4 85 is my favorite lens of all time, ever, for portraits – it's totally gorgeous and I have to quite often shoot literally in the dark, and that's my favorite lens. For action stuff, Nikon D5 with a 24-70 and for when I'm shooting nice little details I have a nice little 105 for that, to go into the real macro stuff."

Favorite Game of Thrones shot ever

With a million shots taken over her ten-year tenure shooting Game of Thrones material, what is her literal one-in-a-million favorite shot? It's a question she's had to consider for the cover of the upcoming book, The Photography of Game of Thrones.

“This is the conversation at the moment, what’s the cover of the book… I love Daenerys with the horse, you know the white horse and the profile of her, because that was one of the first images that really went out there. So for me the most important ones are the ones that I started to see – but that's of course a personal feeling about it, rather than saying this is technically a good photo.

"I mean Jon Snow, in the Battle of the Bastards – I nearly got my head chopped off to get that photo, so I feel that technically that was a very difficult image! There’s a lot that are technically very difficult, but the thing is, to people out there… if they’re not technically minded they'll be like, so what? Because a lot of times people don’t appreciate how hard it was to get an image. So I think personal feeling contaminates that question too much. But probably Dany with the horse, why not!”