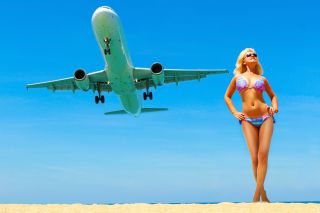 Mao Kao beach attracts thousands of tourists every year... but not for its sand, blue sea and azure skies. The main pull is that the Thai beach is right at the end of the runway of Phuket's international airport... so as you stand on the sand the planes are just metres above your head. Use the right camera angle, and it can look as if you are actually touching the jets as they come into land.

But these thrill-seeking photographers and their models were report to being threatened with the death penalty, in a crack down on security and safety by the airport, according to a report in the Bangkok Post, which has been widely repeated by the world's press.

"A new safety zone near the runway is being developed and will soon take effect, deputy Phuket airport chief Wichit Kaeothaithiam said Thursday after meeting provincial officials", says the report, which goes on to say that people will not be able to enter the area. The report then ends with the chilling quote from the executive that says "The maximum penalty is the death sentence."

With Thailand trying to increase its popularity as a tourist destination, and the beach's reputation as a must-see destination for the alternative traveller, the comments have created a major furore.

Above: Great example of false juxaposition framing - shot on the beach at Phuket beach by Instagrammer @nadyapopo

But it appears the death penalty line was just mean to spell out the maximum sentence available for disrupting an airport... and designed to help tackle the increasing cases of drones near airports around the world.

The viral story about the Thai authorities using capital punishment for beach photographers has now been debunked by another Thai news source, The Thaiger (via Gizmodo).

“The story, originally posted in The Thaiger and provincial paper Phuket News, has taken a life of its own being ramped up in levels of exaggeration in the month since the stories first appeared,” the publication wrote on Tuesday, noting that there was “zero reference” of the death penalty in its story, and that the Bangkok Post’s reference was “unrelated” to selfie-taking tourists. “The international tabloids have added 2 plus 2 together and come up with 17!”

The best travel camera in 2019