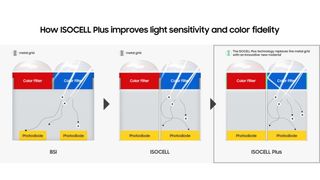 Despite the multitude of different manufacturers of camera tech, it’s been the case for quite some time now that Sony has been the absolute dominant name when it comes to image sensors.

That could soon be about to change, however. Samsung and Fujifilm recently joined forces to produce the ISOCELL Plus sensor, combining breakthroughs in sensor technologies from both companies, and it looks like a sign that the next generation of sensor technology might not be quite so Sony-dominated as the current one.

Let’s take a look at this sensor in more detail. The original ISOCELL was developed by Samsung roughly five years ago, and has since appeared in many of the firm’s devices, including its Galaxy smartphones. The ISOCELL’s innovation was that it fixed a problem known as “crosstalk”, which uniquely affects backside-illuminated sensors, and involves light leak between photodiodes producing noise in an image. The ISOCELL sensor introduced a physical barrier between neighbouring pixels, decreasing crosstalk by 30% and thereby allowing the sensor to produce cleaner images with less noise, even in low light.

So what does the ISOCELL Plus do? Well, it’s the same in principle, but the key difference is that the physical metal barrier has been replaced with a new material developed by Fujifilm. This material is designed to minimise optical loss and light reflection, further reducing crosstalk and delivering a 15% increase in light sensitivity, as well as images with greater colour fidelity. According to Samsung, this will enable the development of ultra-high-resolution sensors with small pixels and also bring performance enhancements to sensors with larger pixel designs.

It may be a while before we see this sensor appearing in a Fujifilm camera, or perhaps on the rumored 64MP Samsung phone that might be coming later this year. But one thing’s for sure – it heralds interesting times ahead for the world of image-making, and is a good sign that we can expect a little more diversity in who is making the sensors for our cameras.

Tips on cleaning a camera sensor