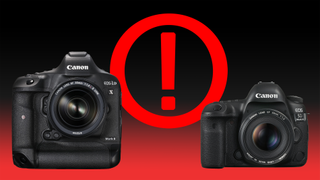 In the wake of last month's report that 30 Canon cameras are at risk of malware attack, the manufacturer has issued firmware updates for two of its key product lines, encompassing the popular Canon EOS 5D Mark IV and 1D X Mark II.

These updates should protect users of current 1D and 5D systems from the security threat, which also potentially impacts every camera that uses the popular Picture Transfer Protocol (PTP).

"Due to these vulnerabilities, the potential exists for third-party attack on the camera if the camera is connected to a PC or mobile device that has been hijacked through an unsecured network."

Canon has now released firmware for the following cameras to address the issue:

As discussed in our earlier story, this is not a Canon-specific issue – any camera that uses the PTP protocol is potentially affected by the same security risk.

"While the Canon EOS 80D was the one tested in this demonstration, we do believe that similar implementation vulnerabilities could be found in other vendors as well, potentially leading to the same critical results in any digital camera," we were told by Eyal Itkin, researcher for Check Point, which discovered the vulnerabilities.

At present, there have been no confirmed reports of malicious activity or attacks due to the security holes in the PTP. However, Canon has issued a number of workarounds – which should also help protect users of any affected camera, Canon or otherwise: