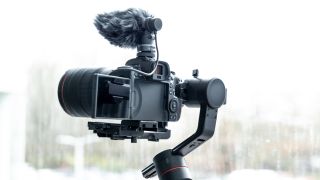 ORIGINAL STORY 20 APRIL 2020: Canon has continued its ongoing tease of the Canon EOS R5, revealing that the camera possesses "cinema industry-standard" specs including 8K RAW internal, and "will shoot comfortably on high-end production sets" such as commercials, dramas and documentaries.

In fact, the Canon EOS R5's specs are so powerful that the manufacturer claims it can act as a partner to its newly announced Canon EOS C300 Mark III cinema camera, as it "boasts features seen only in high-end cinema cameras many times its price point and video features no other mirrorless camera on the market offers."

While the Canon EOS R5's sensor resolution still has not been revealed, one mystery has now been solved: its memory format. Well, make that formats – the R5's dual memory card slots comprise one SD UHS-II and one CFexpress card.

However, the biggest reveal comes in the form of the formats and codecs that the EOS R5 will use. While Canon is positioning the C300 Mark III as the primary camera in the partnership, it claims that the R5 is the ideal second camera for producing high-quality stills along with production-standard video. And these specs are certainly worthy of the best cinema cameras:

• Dual Pixel AF available in all video modes, at all resolutions and frame rates

"We are challenging the market and showcasing our unparalleled strength," said Richard Shepherd, Pro Product Marketing Senior Manager, of the Canon EOS R5, "revealing the camera will offer video recording capabilities unseen in any other mirrorless camera.

“With its ability to record in cinema industry-standard formats and codecs, the EOS R5 is an ideal lead camera for many productions but also, given its compatibility with cinema workflows, the camera will shoot comfortably on high-end production sets.”

The more we learn about the Canon EOS R5, the more excited we get. It significantly outmuscles everything else on the market, including the powerhouse Panasonic S1H – a camera so capable that it is certified by Netflix as a broadcast camera. If its stills specs are even half as impressive, this could be THE camera on the market.

Canon EOS R5 – 5 things we know, and 5 things we don't…
The best cinema cameras in 2020: stepping up to full scale filmmaking
The best camera for filmmaking in 2020 for photographers, vloggers, pros