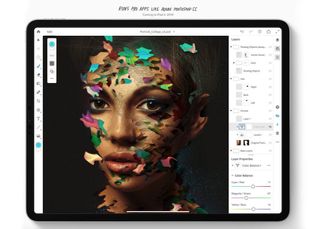 Chatter about when Adobe Photoshop CC for iPad might finally arrive have been growing steadily louder over the past year, but it looks as if we might finally have an answer. The word on the digital street is that Photoshop for iPad will be out before the end of the year.

However, following a Bloomberg report on the consumer launch of Adobe Photoshop CC for iPad, it looks as if there will be some key features lacking from the desktop version in the iPad application.

In Bloomberg's article, an anonymous beta-tester for the software said, "Feature-wise, it feels like a beefed-up cloud-based version of their existing iPad apps and not 'real Photoshop' as advertised. I understand it is based on desktop Photoshop code, but it doesn't feel like it right now."

This is likely to be disappointing to photographers who have been patiently awaiting the "real" Photoshop that was described when Adobe Photoshop CC for iPad was first announced. However, John Gruber from Daring Fireball has an interesting take on the situation. "The mistake Adobe made was not precisely setting expectations for the initial release of Photoshop for iPad… "Full" Photoshop… was never the plan…

John goes on to say that because Adobe Photoshop CC for iPad is built on the real Photoshop core, there will be complete compatibility with PSD files exchanged with the desktop versions of Photoshop. He also reasons that once the first version of the software is complete, new features will be fast and free-flowing. This is because the core rendering and functionality at a foundational level will have been built to last for a decade or more.

John adds that apparently Adobe's team of engineers working on this project have plans to add features on an "aggressive schedule" once Photoshop for iPad has been launched, so expect to see an exciting 2020 for Adobe.

With only a couple of months left of 2019, we're exciting to see just how Adobe Photoshop CC for iPad works – and how useful it will be for photographers.