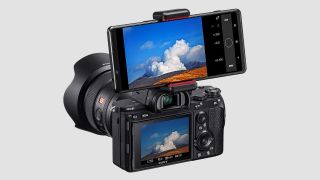 If you've been longing to mount your smartphone on your hotshoe to act as an external monitor, your wish has come true! Among its host of dazzling new features, the Sony Xperia 1 II can pair with your Sony Alpha camera to act as a second screen.

This fascinating function enables the Sony Xperia 1 II to work in conjunction with the Alpha series of mirrorless cameras, radically increasing the 3-inch rear screen of Sony's bodies with the huge 6.5-inch display of the new flagship camera phone.

And it's not just the sheer size of the screen; the high quality 21:9 HDR OLED display boasts 4K resolution and a smooth 90Hz refresh rate, and is optimally tuned for image fidelity. Its white balance, for example, can be customized to D50 or D55, enabling pristine reproduction for reviewing stills or footage.

Likewise its color rendition is highly impressive, with an equivalent 10-bit display (achieved via 8-bit with 2-bit smoothing) that can display a spectrum of color without exhibiting banding issues. Indeed, the screen supports professional reproduction standards such as DCI-P3 100%, BT.202013 color space and D65 White Point, and also boasts a high contrast ratio of 1000,000:1 to display deeper blacks and more natural whites.

So what does all this mean – will the Sony Xperia 1 II replace the best on-camera monitors and leave the likes of Atomos and Blackmagic quaking in their boots? Well, perhaps not yet.

Sony has been very reserved in its claims for the phone's use as a display, which employs wireless connectivity to connect to cameras via the Imaging Edge app. In short, it's not going to serve the same purposes as professional-grade external video screens – but it definitely looks to be a useful tool for framing and reviewing your stills and footage on a larger, more accurate display.