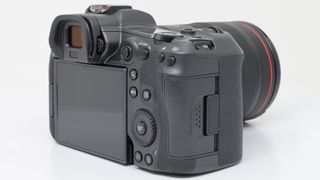 ORIGINAL STORY 03 MAR 2020: The first images of the rear of the Canon EOS R5 have appeared online and reveal a number of design differences from the base Canon EOS R – namely the abandoning of the M-Fn touchbar.

The Canon EOS R5 will instead feature a traditional joystick – and not the Smart Controller of the Canon EOS-1D X Mark III, which we'd hoped for – in addition to a familiar AF-ON button.

Among the many divisive opinions of the Canon EOS R upon its release, the M-Fn bar was reviled by most users who would much rather have seen a traditional joystick – and all credit to Canon for listening to the feedback. Indeed, in all subsequent revisions of the body (the Canon EOS RP and Canon EOS Ra) the input was unceremoniously dumped.

In the newly revealed images of the R5, shared by Japanese outlet DC Watch, we see that the critics got their wish. In fact, the entire rear of the camera has been completely redesigned; the streamlined 8-button approach to the EOS R has given way to a more traditional 11-button configuration much more akin to Canon's DSLR design, right down to the reinstated scroll wheel (replacing the circular D-pad).

There are plenty more changes, from the protruding DSLR-like viewfinder on the back to the additional function button and covered port on the front.

"The shape of the [power] switch has been changed," reports the website (via machine translation). "The depression from the back is deeper than the EOS R, and it is arranged a little deeper. The shape of the eyecup, which has never been seen before, is a shape reminiscent of a soft touch at the time of eye contact.

"The layout of select buttons in the AF area has also been changed… [on the front] it can be seen that a cover that can be opened and closed is provided below the lens attach / detach button. Is it like the remote control terminal of the EOS 5D Mark IV?"

It's also notable that the body of the EOS R5 is chunkier than that of the EOS R, no doubt to accommodate the in-body image stabilization system. However, the grip also appears to be deeper and has a memory card door – does this mean that the R5 supports one or more CFexpress cards, like the 1D X Mark III?

We look forward to getting our first look at the Canon EOS R5 at The Photography Show, where the camera will make its first public appearance in Europe from 14-17 March at the NEC in Birmingham.