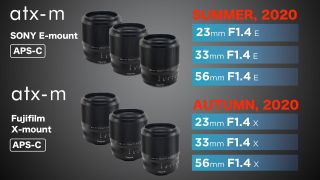 Tokina has announced a raft of new lenses due this year for mirrorless APS-C Sony and Fujifilm cameras. This comes as welcome news, given the current relative lack of third-party lenses for APS-C Sony and Fujifilm systems. Come summer we can expect three new primes for Sony E-mount cameras: an atx-m 23mm f/1.4, atx-m 33mm f/1.4, and atx-m 56mm f/1.4. This same trio of primes are scheduled for release in Fujifilm X-mount-fit in the autumn.

And it's not just APS-C Sony shooters who Tokina is out to impress this autumn. The company is also due to launch two new full-frame Sony FE-mount optics for A7 and A9 cameras. Expect to see atx-m 35mm f/1.8 and atx-m 50mm f/1.8 lenses joining the recently launched atx-m 85mm f/1.8 portrait lens - a lens we recently reviewed and came away very impressed by.

No technical details have been revealed about these upcoming atx-m lenses, but if their performance is on par with Tokina's excellent Opera 50mm, we're in for a treat.