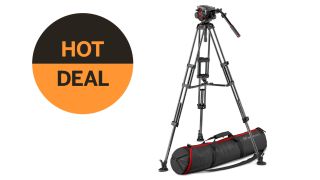 As videography becomes more widespread, and shooting video becomes an increasing part of many photographers' everyday workflow, a dedicated video tripod is an evermore important part of many people's kit bag.

The counterbalance system features four presets from 0 to 16.5lbs, and the carbon fiber legs are durable, strong, and resistant to corrosion (especially by salt water, to which aluminum legs are susceptible).