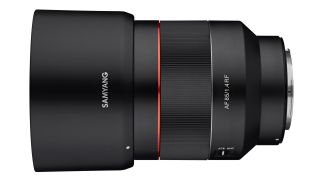 The fast telephoto prime is ideally suited for portraits, and thanks to its f/1.4 maximum aperture promises great bokeh backgrounds when used wide open.

Samyang launched its first autofocus lens for the Canon RF mount last year, with the release of the Samyang AF 14mm F2.8 RF. The Korean company already has an RF-mounted manual 85mm f/1.4, but this adds a Dual-Linear Sonic Motor (DLSM) which promises  high-speed and silent autofocus performance.

With a total of 11 elements in 8 groups, with 4 high-refractive (HR) optics and an extra low-dispersion (ED) lens, have been designed to create "impressive image quality from corner to corner, even at the maximum wide open aperture of f/1.4". Smooth bokeh effects are aided by a nine-bladed diaphragm design.

Everything we know about the Canon EOS R5