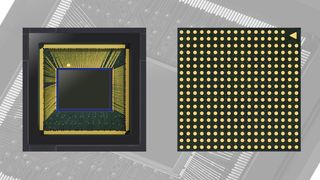 Samsung has unveiled a pair of new camera phone sensors, including a groundbreaking 64-megapixel sensor that packs more pixels than anything available from Canon or Nikon – and even outmuscles a number of medium format cameras.

These new products expand the South Korean giant's 0.8μm sensor lineup that had previously peaked at 20MP with the Isocell Slim 3T2 – the world's smallest image sensor, at just 5.1mm, which was revealed in January.

The Isocell Bright GW1 isn't just a high resolution sensor, it's also an intelligent one. Using Samsung's Tetracell technology the sensor can unify four pixels into one, in order to achieve high quality images in low light environments, albeit at a reduced resolution of 16MP.

In bright light, however, Dual Conversion Gain converts received illumination into an electric signals according to the environmental lighting conditions to make more efficient use of collected light. This, combined with a remosaic algorithm, produces full-res 64-megapixel images with good lighting.

The sensor also employs real-time HDR of up to 100dB (decibels); in comparison, Samsung says, conventional image sensors are capable of around 60dB, while the human eye is capable of around 120dB of dynamic range.

It's no slouch in the autofocus department, either, with Super PD – "a high-performance phase detection auto-focus technology" – delivering faster and sharper results.

And, if slow-motion video is your thing, the sensor is capable of capturing 1080p footage at a huge 480 frames per second for smooth and cinematic video recordings.

We're reaching something of a critical mass in terms of smartphone sensors, which are experiencing the same megapixel arms race that for so long drove traditional camera spec sheets.

With this 64MP sensor, Samsung Galaxy phones will soon shoot higher-res pictures than everything from the Nikon D850 DSLR, the Panasonic S1R full-frame mirrorless and even the Fujifilm GFX 50R medium format camera. Does this spell the end for traditional hi-res photography?